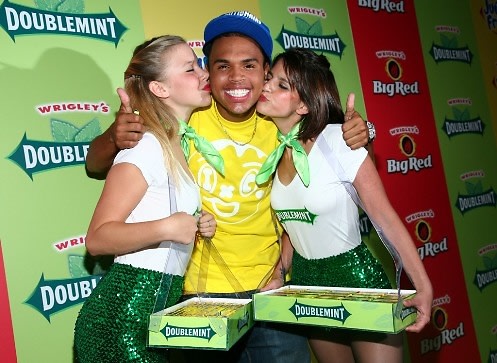 I was obsessed with the Doublemint Twin commercials as a kid (one of my favorites is HERE). Now, as we previously mentioned, Chris Brown is giving the old jingle a new makeover.  Chris,  Julianne Hough, and Ne-Yo have all partnered up with Wrigley's gum to remake the iconic "jingles" for Doublemint®, Juicy Fruit® and Big Red®. The updated jingles, which will be the backbone of a new August ad campaign, were unveiled during a private concert hosted at the Nokia Theater, Times Square last night.

Grammy-nominated artist Chris Brown and country singer Julianne Hough performed their contemporary versions of the Doublemint and Big Red jingles, respectively, for a packed house of 1,000 plus fans at the invite-only concert.

Fans gathered at pre-determined New York City landmarks for a chance to receive tickets to the exclusive, live performances. Big Red, Doublemint and Juicy Fruit buses were stationed in Rockefeller Center, Macy’s Herald Square and Union Square to transport the first 164 lucky fans in line to the concert location.