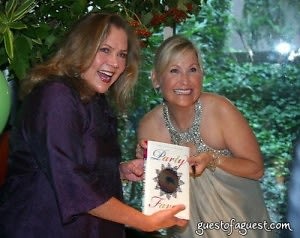 Last night at Michael's, Dede Agar, Somers Farkas, Claire Mercuri, Margo MacNabb, and Marlyne Sexton, with the Lyons Press, held a book party for the release of Nicole Sexton's novel Party Favors, A Novel of Politics and Greed.  Written with co-author Susan Johnston, it is a fictional account of the dirty world of political fundraising.

The book follows the meteoric rise and fall of the young Temple Sachet, the Big Money Babe of the Republican Senate. From humble beginnings as a "Ray of Light Intern", Sachet maneuvers through Washington, D.C.'s corridors of power - populated by clueless staffers, shady lobbyists, and grasping senators - to become one of the most powerful fundraisers in America.

Sexton is a longtime Republican fundraiser and former Director of Finance for the National Republican Senatorial Committee.  She has now changed directions and joined Bono and Bobby Shriver at The ONE Campaign, as well as penning Party Favors.

[Party Favors, A Novel of Politics and Greed] [Nicole Sexton]