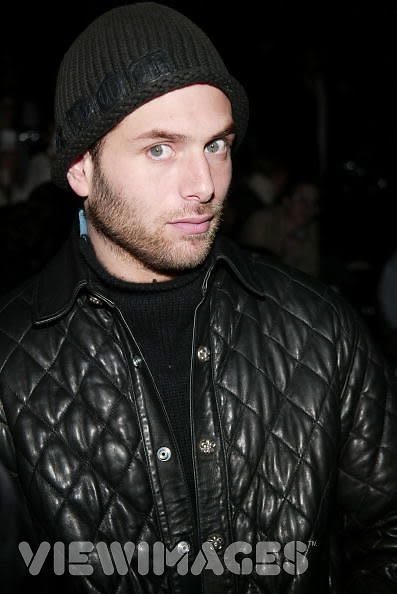 The Jacket that is causing quite the fuss over here at gofg.  A quick google search on the beloved item turned up the above picture.  Yep that's Rick Salomon Anderson sporting the same jacket that we reported seeing on "greeseball mcgee" Brandon Davis last thursday night.  In case you missed it, our dislike of the jacket caused one reader to call into question our "style".  Our own Stanley was quick to come to our defense.  His response follows:

1. Oligopoly - October 29, 2007[Edit]
You have no taste. That jacket is Chrome Hearts limited edition–costs $12,000. Rick Salomon can be seen wearing that jacket around Park City during the 2003 Sundance Film Festival. Look under his wireimage pictures for proof. He also wore it when he sat in the front row of the Zac Posen show during fashion week fall 2004.

2. Stanley Stuyvesant - October 29, 2007[Edit]
You equate taste to Rick Salomon, the guy who made and sold his sex tape with Paris Hilton? Yes, you certainly know taste.

Oh, and citing a $12,000 price tag to try and give legitimacy to a piece of clothing is laughable. I could find a better jacket in the bargain bin at a flea market. Or I could skin the backseat of a Buick Park Avenue.

The day you get out of your little fashion bubble, will be the day you realize that fashion is a BUSINESS, a very effective business that makes individuals like yourself feel good about spending 1000% mark up on clothing.