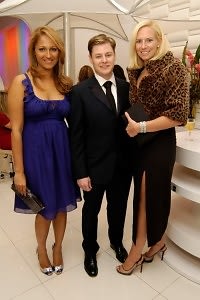 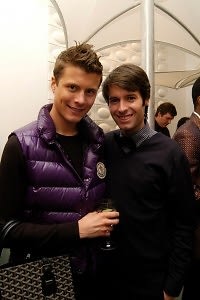 [Photos by JACLYN SNOW for PMc]

Attending the Cleo Spa & Salon One Year Anniversary party on Thursday night held a lot more significance for me than just celebrating the legacy of such an imaginative spa. For me, it was about celebrating friendship. The Opening Fete of Cleo in September 2007 marked the beginning of my friendship with Susan Shin (Manhattan’s authoritress on the most magnificent events ever). We worked in the same building on the Upper East Side and became acquainted in the elevator, of all places. Shortly after, Susan invited me to Cleo’s opening. At that opening I met Nick Dietz, Susan’s right hand man, and we became fast friends to say the least. One year later, many fabulous parties later (the history is embedded in the pages of Guest of a Guest) and many many laughs later, we all found ourselves together again at Cleo Spa and Salon.

Resplendent in purple chiffon from Rebecca Taylor, with perfectly manicured toes peeking from silver sequined Miu Miu pumps, authoress of the moment, Anisha Lakhani enthralled guests with the inside scoop on her best-selling novel, Schooled -- which debuted in the New York Times that morning, making for a double celebration. Wielding a mighty fuchsia pen in her pink manicured hand, Ms. Lakhani, autographed her books from the gift bags which also were filled with other treats such Grand Marnier miniatures, Phyris cosmetics and CLEO gift certificates.

You know the age old term, ‘working lunch’? Well this turned out to be a ‘working party’. Guests were literally getting manicures, make-up applications and hair blow outs compliments of Cleo as they sipped cocktails and moved to the music. Smiling shyly, a radiant Isabel Getty (daughter of Chris and Pia Getty) sported a sassy manicure, setting off a beeline to the sleek manicure stations, demonstrating that beauty care begins at any age. Meanwhile, other guests like Carter Cramer, Kristian Laliberte, Leah Bourne, Sarah Herbert Galloway, Stephanie Chassing, Edward Barsamian, Kerry Cassidy and Mina-Jacqueline Au swayed to the tunes of DJ Serebe and the celebration did not end there, as holiday cocktails by Grand Marnier like the Cleo-tini and Orange Smash offered a fair amount of social lubrication.

The coiffing and manicure aspect worked out well seeing as many party goers were discussing their full roster of events that night – some people like Devorah Rose had between 5 and 7 party stops to make after opening her night at Cleo.

The name of this beauty mecca in Trump Place is derived from its founder, Cleo Jung, who first launched her CLEO beauty care business in 1999 with locations in Gramercy Park, Chelsea and White Plains, catering to busy clients including Julia Roberts, Eva Mendes and Isabella Rossellini. Designed with a calm, Zen-inspired approach combined with lush profusions of art, CLEO SPA AND SALON is a relaxing haven from the hustle and bustle of urban life, where beauty and art harmonize to create well being.

Cleo isn’t just a place that inspires beauty and delivers results. For me, it was the start to some beautiful and fun friendships and for that; I’m marking the two year anniversary on my calendar now!

[Anisha Lakhani Schools Us All]