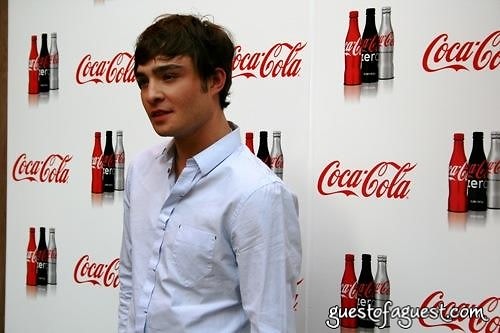 Go Here for more Photos on this event by Hayley Proudfoot

Last night in the exquisite yard at Soho Grand the event 'Cool off with Coca Cola' was held to introduce Coca Cola's brand new aluminum bottle.  Many guests enjoyed this complimentary drink with a touch of vodka, of course, along with canapés and DJ Miss Siagon playing live.

Being from England and having never seen an episode of Gossip Girl, I was unsure of what all the fuss was about.....

so just after doing what I'm good at, I decided to leave for my next photo shoot, all of a sudden, Ed Westwick appeared!

Ed Westwick is a cast member from Gossip Girl and together with New York Celebrity DJ 'DJ PS1' they both further encouraged promotion of the new bottle.