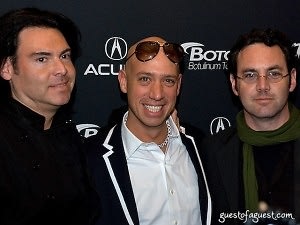 [Robert Verdi as "Master of Ceremonies"]

Go HERE for more photos from this event by Mark Bailey

Last night the Hammerstein Ballroom was packed with about 1,700 guests all there to get a glimpse of the fashion future. GENart and Botox sponsored the 10th Anniversary of the Styles International Runway & Awards show. 30 young fashion designers were there competing for $35,000 in prize money. The fabulous Robert Verdi was Master of Ceremonies, Sophia Bush was a special presenter and other sponsors included Acura and Tone Body Wash.

The group of 30 designers was whittled down from over 800 entrants from 32 foreign countries and 35 US states. The looks going down the runway were genius and it was clear that all the finalists possess enough talent to be the next IT designer.