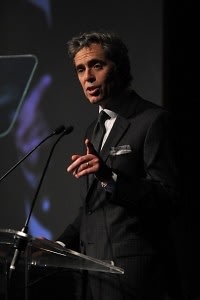 At the GQ Gentlemen’s Ball on Wednesday night at the Edison Ballroom, we chatted with GQ publisher Peter Hunsinger, who served as host-with-the-most, greeting red carpeters like Aston Kutcher with a gregarious embrace. We quizzed Hunsinger on the aftermath of his magazine’s controversial Glee cover:

We wondered about the original instinct to go the Glee route in the cover image and whether it hinged on instigating.

“You know the magazine is supposed to be of the popular culture, right?” he said. “And that’s what we did.”

He emphasized that scintillating image, shot by Terry Richardson, was not a tactical choice to create buzz and attract attention.

“You know, the stir was created by forces outside of GQ. That was happenstance. It had nothing to do with a strategy, or anything like that. But we just think Glee is an important thing, great looking people, and Terry Richardson, right?”

That equation ultimately proved advantageous and was, according to Hunsinger’s appraisal— worth the whole rigmarole.

“Well, you know, sure. Any kind of press is good,” he said of the mixed reports of intrigue and horror the cover galvanized.

He then sidestepped back to greet Jimmy Fallon, who said, “What’s up, brotha?” to us when we called out before he dodged the press line.