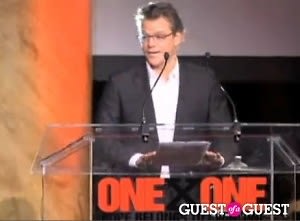 For the first time since his wife gave birth just over a week ago, Matt Damon took time off daddy duty to hit the ONEXONE Gala at Capitale to raise awareness for the charity, as well as honor Patricia Arquette for her work with children in Haiti.

Matt, looking slightly bloated but wide awake for someone with a newborn, has been highly involved with the organization which helps improve children's lives around the globe, traveling to places such as Rwanda and Ethiopia. He took a good roasting from the event's MC, sportscaster Jay Bilas, who defined the night as a "Matt Damon ass kissing contest," which was both true and deserved. When not hosting gala evenings complete with champagne and tuna tartar, Matt encourage his celebrity friends like Adrien Grenier to join the cause.

Honoree Patricia was emotional as she accepted her award and made it clear it is a cause she cares about. When harassed by reporters earlier in the evening on the carpet about her brother David Arquette's divorce, she was adamant about not discussing his marital problems, but instead focused on the importance of raising money and doing good. 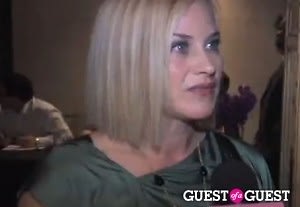 David was there to support his sister before jetting over to a GQ event where he was being honored. The Scream 4 actor avoided any uncomfortable questions, shooting down the press line without speaking to anyone. Howard Stern was not there, which may have been the problem. 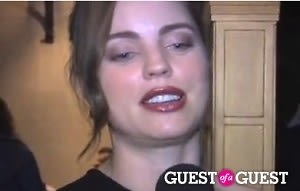 Melissa George, soccer star Mia Hamm, and boxer Lennox Lewis were much more friendly, while well known humanitarian Paul Farmer added gravitas to the evening. All stayed for the entire event, clapping enthusiastically as school children sang a number with Matisyahu. Collective Soul also performed, but the big hit was 9 year old piano phenom Ethan Bortnik who told me that "Matt is really nice." When what his favorites movies of the Oscar winners are, he let me know he'd never seen any because they are "for adults," adding that his "parents really like his films."

If you'd like to view a livestream of the event, you can do so here.