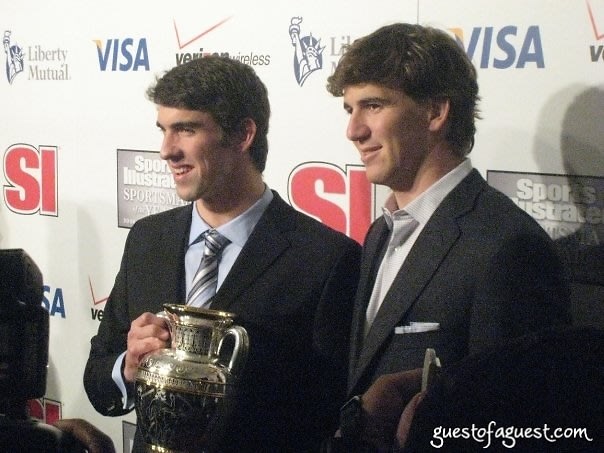 By Tim Morehouse and Jason Rogers

Go HERE for more photos of this event and TAG YOURSELF and your friends!

Tuesday night at the Gehry designed IAC building, legends of New York City sports and several hundred guests turned out to honor Michael Phelps as the Sports Illustrated Sportsman of the Year.

Now a quick word on Sports Illustrated parties: they throw amazing parties! At the Athens Olympics, the Akrotiri club in Greece served as the home of the Sports Illustrated parties which still remain the stuff of Olympic lore and legend. Ask anyone who was in Athens about the SI party, and you can expect at least a five minute story detailing some unique adventure which took place at the beautiful beach side club.

Why the rave reviews? Cabanas, amazing food, synchronized swimmers performing in the pool mid-party (seriously!), women’s soccer team members doing conga lines with their gold medals, every athlete in attendance(post competition of course!) and the list goes on and on… 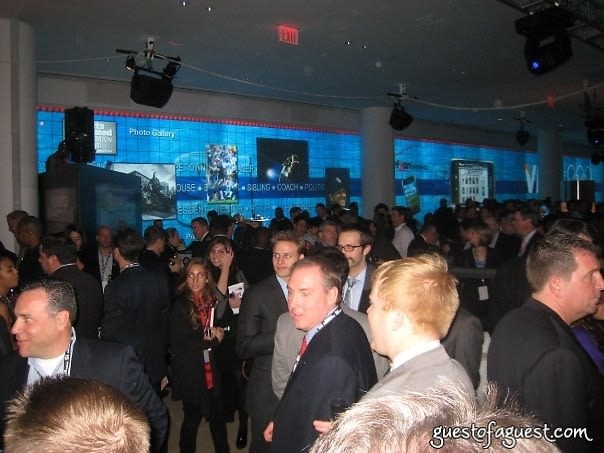 Sadly, in Beijing there were no SI parties (although any rumor of one spread like wildfire), but luckily they had this one in NYC! And true to form, the party did not disappoint. The AIC space was decked out with the SI logo (pillows on the couches to the logo on the napkins), the music was rocking and a cool electronic wall sported various sponsors logos and Olympic highlights. And as would be expected, copious amounts of the Michael Phelps SI issue were strategically placed throughout the space.

Brandon Jacobs proudly showed off his super bowl ring (so big that it would be a bracelet for most people), Eli Manning was extremely gracious, staying long after most athletes had left to talk to fans, take pictures and sign autographs. Mike Richter chatted about the good old days of the Rangers, and super mom Deborah Phelps was even in attendance and she mixed and mingled with all the athletes like a true pro while keeping a motherly eye on her son .

Where will we be next? You can catch up with us from 6:30pm-9pm on Friday at our Holiday Cocktail Party at Rock N Sake (139 W. 25th St.). We can’t promise Michael Phelps, but you do get a couple of Olympic fencers!