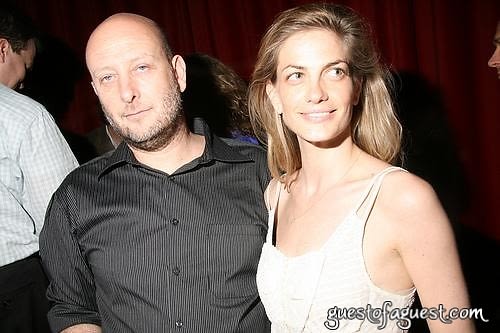 Go HERE for more photos from this screening by Porter Hovey.

Child sexploitation is (at least in my opinion), one of the most serious issues facing our world. Did you know that currently there are THOUSANDS of children in New York City alone that are being used as sex slaves?! Neither did I. And this is exactly what I told Guy Jacobson, director of Holly, in the cab ride to Mansion, where the after party for the film's screening at the Quad was being held this Friday. "I mean I knew that some of those 'massage ads' in the back of Time Out NY were sketchy, but I never imagined that a child would be taken advantage of in this way blocks away from where I lived!"

This is a reality that I'm guessing many of you are naive about as well. Which is why, although "Holly" may not be the feel-good movie you're looking for on a Friday night, it's one that is necessary to bring attention to this difficult issue. This is also why, I commend people like Guy, Adi Ezroni, and the staff at Priority Films for giving up so much of their lives so that this film could be made.

If the Oscars were actually based on the merits of acting, and not the money spent on production, distribution, and marketing, Thuy Nguyen's portrayal of Holly would win her best performance hands down. Never have I seen such a young actor do so much on screen with such a limited speaking role. As for Ron Livingston, who played the other main character, I will just say this: I never knew that Berger had this in him....Sex and the City and Office Space were hardly able to showcase his talent as an actor, one that shined in 'Holly'.

Child sexploitation, as realized after my dinner with Somaly Mam, is a mammoth of a problem, and one that will most likely be around forever, at least during my lifetime. There are however, real ways in which you can help reduce the numbers, reduce the demand, and change the laws. Red Lights Children is a good place to start. For more information about where you can see Holly and how you can support the film and its cause, head to the Priority Films website.