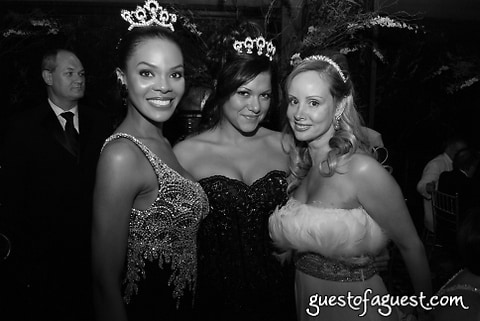 El Museo del Barrio was at it again last night. This time at their annual black tie Gala at Cipriani's. Antwan got a chance to rub elbows with everyone involved in this amazing organization as well as Miss Universe, Miss USA, and Miss Teen USA (tough gig I know). The event was chaired by Ruben + Isabel Toledo and Yaz + Valentin Herrera to Honor Poet Mario Vargas Llosa. With several big names on the committee, gofg was honored to be covering.

As it is the Latin American tradition, El Museo Gala’s fifteenth birthday will be celebrated in the style of a quinceañero; this is a coming-of-age party for a daughter turning fifteen. For this gala, guests were invited to wear white or black (with long gloves and tiaras optional).

This year’s Gala Chairs were Yaz and Valentín Hernández, and Ruben and Isabel Toledo.

At the event, Candy Pratts Price, the Executive Fashion Director of Style.com, even approved of Antwan's get up, which we were all quite happy about!

The evening’s goal was to raise one million dollars, a first for El Museo’s Galas. At the end of the night the gala had raised over $850,000, just short of their goal, when the museum board president Carmen Ana Uanue announced she would be donating $3 million to El Museo's expansion campaign.

El Museo was founded in 1969, and is New York’s leading Latino cultural institution, representing the diversity of art and culture in all of the Caribbean and Latin America. El Museo has had a significant impact on New York’s culture, and is a major stop on Manhattan’s Museum Mile on Fifth Avenue. Currently El Museo is undergoing a $22 million-dollar facelift, which will be completed in fall 2009.