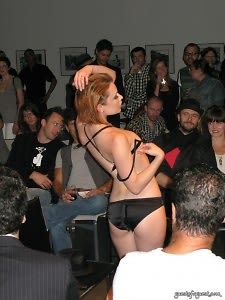 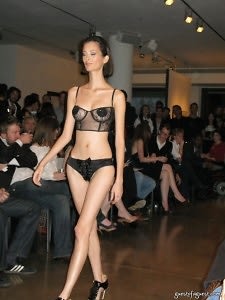 Go HERE for more photos of this event by JOHN NORWOOD

Oh, sweetie! Noot Seear and Annie Henley are like that. They are top models who donate much of their time to co-produce BeBare, a charity fashion show and auction. BeBare is a fundraiser for Rose Charities, which supports projects worldwide. According to their website, "BeBare is "the naughtiest fashion auction in the world." What looks like a standard fashion show at Milk Studios in Manhattan with rows of chairs and a runway, isn't. First, the cocktail party, then the fashion show auction - then the striptease? The models, mostly women, parade their clothes down the runway while the audience bids on the clothes that a model is wearing. Then the models strip off their clothes right in front of the winning bidder. They strip right down to their Kiki de Montparnasse lingerie. The winning bidders, mostly men, love it. And, the models love doing it. They seem to have so much fun - there must be a little bit of stripper in every model.

The name for the event "came from my mom," says Noot. "When I was little, she used to ask me, 'Do you want to get dressed or do you want to be bare?' Of course, I wanted to be bare and run around naked! My uncle, Dr. William Grut, started Rose Charities fifteen years ago in Canada. We're a small, grass roots charity that can show you where and how far your money goes. So many people have donated to Sri Lanka and are wondering where their money went. But, we focus our resources on projects that don't waste time or money. Donors like the idea that $100 donated for the eye clinic means that five Cambodians will get their cataracts removed. $200 will send a Sri Lankan to university for a year."

The fashion show started an hour late. Annie Henley, "Considering how difficult it is to put on a show for the first time in NYC, with everyone donating their time, hopefully, the wait was not so bad. We had to coordinate everything; models, stylists, make-up artists, hair stylists, invitations, tickets, bartenders, booze, staff, wardrobe, asessories, you name it. And, because everyone volunteers their time, we did it without the usual, all-important rehearsal, so we weren't sure how all the pieces would fit together. None of this is easy just because we are models and happen to know some people in the fashion business. When we needed clothes, at first, no one would give us anything. It was the usual, 'I'll get back to you.', then nothing. Until we asked Valentino Vitto, at Scatola showroom, for a Vivienne Westwood dress, 'Just a dress? How about I give you ten!' After that a lot of others came on board." 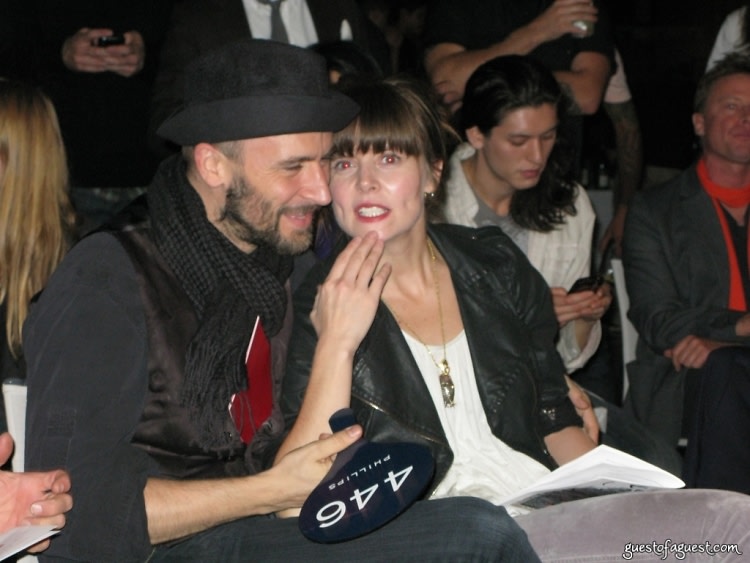 Annie is used to a little bit of chaos. On her first trip to Paris, very young and all alone, she went to a casting for the designer, Claude Montana. Just before entering the building, she stepped into a huge pile of doggie-doo. There was no way she could get it all off. Plus, she didn't realize that it was a casting for hundreds of other girls, which makes timeliness less important. So, she was afraid to be late and in she went. Claude Montana, himself, reviewed the long line of girls. When he got to Annie, he stopped and smiled, "You stink, but you're hired!". Right after that she went back to New York for a casting with designer, Jean Paul Gaultier. At JFK airport, a bird dropped another offering from the sky all over her leather jacket, "It was a huge blob." And, of course, she got the job.

Noot, regarding the fashion show, "It's crazy. You've got to see it!". Some of those lucky enough to see it; fine art photographer and member of the board, Hunter Barnes, Annie's boyfriend and NY Rangers team physician, Dr. Andrew Feldman, NY Rangers players Henrik Lundquist, Brendan Shanahan and Aaron Voros, Noot's mom Josephine De Freitas, Noot's cousin Charlotte Schroler, Annie's mom Jill Henley, event co-producer, Elizora Olivier, models Ingrid Schau, Avril Primera and David Hemphill, and Ali Agalar and Mazdack Rasi who donated their time and Milk Studios. Some of the models in the show were; Shaila of Red Models, Giselle Luna of New York Models, Luiza Windberg of Elite and Katarina Benzova of Red Models. No matter how beautiful those girls are, none of them would have dared to step foot onto the runway without help from the likes of hair-stylist, Aiko, make-up artist Eva Collins, make-up artist Roni Modesto, stylist Nicholas Grassa and hair-stylist Bradley Irion.

Actually, some might think that I was the luckiest guy there. Shortly before the event, I called producer Ovey Yeung and suggested that I do behind the scenes coverage to show what goes on. And, yes boys, when you are in the dressing room there really are naked and semi-naked models around. Along the way, I have seen every body since Cindy Crawford, Stephanie Seymour and Linda Evangelista. I hate to disappoint, but it is very casual and asexual, just another day at the office for them. However, if you are a guy and find yourself in the dressing room at a fashion show, there is an etiquette that must be followed. Do not ever stare at a female model who happens to be bare!