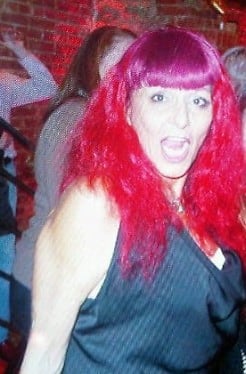 Patricia Field launched her new line of handbags for MCM last night at her Bowery Studio with blue curacao vodka drinks, her pair of poodles posing with her for pictures, and of course, a preview of her designs.-

Patricia's partnership with the German leather luxury brand was an easy process of downtown meets uptown.  One of her former employees got a job at MCM and asked her to collaborate, knowing that the red headed designer had been a fan when she was younger.

"I have a long history with MCM," Patricia told GoaG. "Back in the day all the ghetto kids and the ball kids loved MCM as one of their labels.  I didn't want  to change it. I kept the style and the trims. I just changed the fabric and put my icon on top and bam, it was easy. I think when things are easy, they are good."

Will these bags, that feature a drawing of a woman's face by Pat's friend Martine,  possibly end up in Sex in the City 3 if there is one? Patricia, dressed in glittery harem pants, doesn't seem to want to talk about it. "I can't answer because I don't know," she said. But will she be working on the film if it does happen?

I don't know what that means. Yes? She will work on it? I let it rest though because it does not seem to be her favorite subject. "Do you get sick of talking about Sex and The City?" I ask instead as one of her poodles scampersover my foot and continues its tour of the party.

"I don't get sick of talking about it on some levels and on other levels I do," she sighs.

Okkkaayyy then. Let's leave out the sex and talk city. Patricia was born and raised in New York and is a staple when it comes to the cool crowd.

"I look at my life and I have and continue to have a really great life. There are so many great times in the city '80's, the '70's. Studio 54. You just take life as it comes and try to enjoy it. The only thing I didn't like about the city was the Giuliani years. Other than that everything is fine."

We're betting last night was a good moment for Patricia.  Alexandra and Theodora Richards, Rachel Zoe's former slave Brad Goreski, Mike Stowell and Peter Mellon of Arcade Fire, Genevieve Jones and Ali Hilfiger all stopped by to toast the line.  For those interested in getting your own Patricia Field for MCM handbag, they run from $250 – $700, and will be sold at select Saks Fifth Avenue