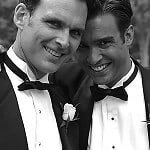 Quote of the day by Adrien Field who wrote a fun piece on what men should wear to weddings.  We think this is the perfect pre-cursor to the Wedding Party which will be up later today: From Savoirvivre NY:

"Weddings can be a cause of consternation for many young men: What to wear? You’re afraid that a tuxedo makes you look like you’re going to a high school prom but know better than to pull out the business suit.

With the dawn of web 2.0 where wedding photos won’t just be put in an album to gather dust, but publicized on Facebook, Flickr, Myspace, and a wedding blog to be seen by anyone, there is an added incentive to look your best....

At the same time, many equate web 2.0 with a loosening of formal ties. In an age where no one sits down to handwrite a letter, has the tuxedo become the sartorial equivalent of the quill? The answer is a resounding no: just because you may read Wired and Tumblr every detail of your daily life doesn’t mean you should dress like a Silicon Valley web programmer.