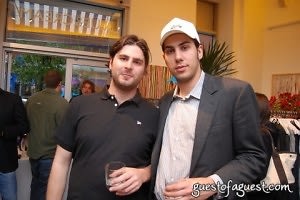 Last night, Blue and Cream on the Bowery was filled to capacity with tall skinny blondes, dapper businessmen, and locals from the Lower East Side for the Sir Drake clothing line party. Cousins, Topper Luciani and Paul Longo, (pictured above), first thought of the line while they were in college in search of the perfect polo shirt. When they couldn't find it they enlisted the help of Rich Catalano, who had been in the garment business for over 30 years and the Sir Drake clothing line was born.

The polos are rooted in tradition but have an edge. Instead of say an alligator or a polo player, each Sir Drake item has one of eight icons that embody an attribute of the Sir Drake man. Motorcycles represent freedom, a black sheep represents individuality, and a flying pig represents achieving the impossible. The polos are fitted around the torso, unlike some of the boxier brands, and they're easy around the arms and shoulders, because no one wants a shirt that looks like they bought it in high school.

Topper and Paul said there was nothing like a crisp new shirt and they were tired of the distressed look. Crisp must be the new black because everyone looked freshly pressed. Anna Wintour's Assistant Asia Baker, Scott Caputo, the newest partner of the Sir Drake team, Upper Echelon Owners Seth Campbell and Nick Cohen, and Artist Baron Von Fancy were all in attendance at the Svedka vodka sponsored soiree.

Afterwards the staff held a small gathering at Antik, which quickly turned into a full-blown party. Paul and Topper were giving lessons in Sir Drake partying and had their fantastic interns Brandy Hearn and Chris Bardawil show me the ropes. And what is an after-party without an after-after party? By 1am the back room at Marquee was full of trendsetters in Sir Drake attire, toasting to the company. I'm jealous, I want a polo too. Where is the women's line? Brandy is the only woman in the office and I hear she's already sketching. Maybe there's a Madame Drake line in the future.