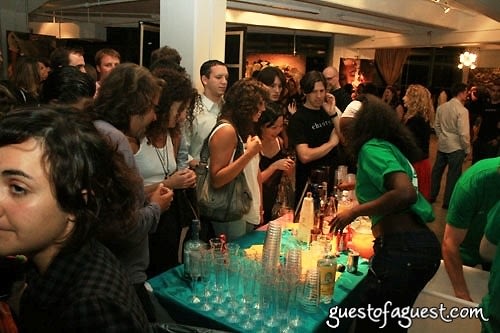 Go HERE for more photos of this event by Ben Kaufman.

Splashlight Studio hosted it's Grand Opening Tuesday night in Soho.  Peter Ruprecht showcased his ‘Monadic Nomad’ photo collection. The event was a definite success, with a large crowd of photographers, artists and models all mingling around  Peter’s photographs of India, his audio-video installation, and photographic images from Nepal.  To top it all off, they served food inspired by his adventures.

Ruprecht played quite the host, welcoming all of his guests as they made their way through his exhibit. I spent a few minutes talking to him about his journey and what it took to get the ‘the Monadic Nomad’ off the ground. He was very passionate about the cause he was supporting: Charity: water, a non profit organization that provides water to people in developing countries and the collection will fund freshwater wells and sanitation projects in India.

The DJ kept everybody moving throughout the night as well as a cocktail bar with some new and unusual drinks that I can’t even describe but must get the recipes to.. Amongst everything I did get a chance to meet up with designer Jerry Tam from ‘Project Runway Season 5’ who, like I had the chance to get a glimpse into India’s culture in a creative and sensational way.