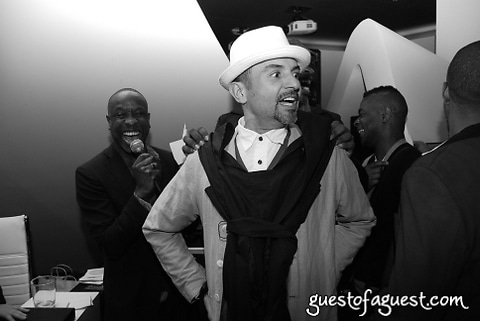 Note from GofG: Our new duo Antwan Duncan and Honor Titus hit the town last night, first stopping by the Blue & Cream event, and then heading downtown to the JC Report event. Here are their recaps:

The JCReport had a launch party yesterday at the Downtown W Hotel, located at 90 West Street and it was fantastic. The venue was not only the perfect size for an event, but it was also very beautiful. I hit the event up with Honor at about 7:45 and the party was already jumpin'. Everyone was socializing and taking part in the open bar, so we did so as well. Jason Campbell, the man of the hour, was very charismatic and easy to talk to and moved with ease through the crowd. 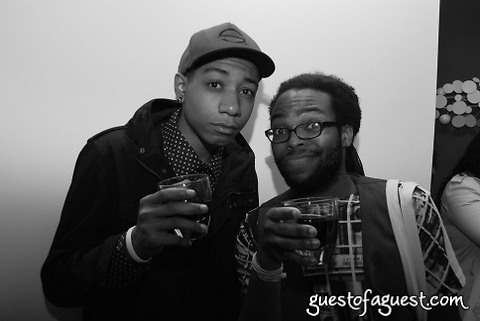 Speaking of the crowd, it was filled with designers and artists from all walks of life all who were capable of holding an intelligent conversation. I point this out only because with an open bar I often times find it hard to talk to people that are completely drunk or just only interested in staying as close to the bar as possible! Haha!

The party featured a raffle for designer giveaways as well as a projection of featured photos from the JC Report website, all of which were stellar. I would recommend attending any event Jason Campbell is in any way associated with because you are sure to have a good time and will probably walk away with something awesome and designer. Also, check out the JCReport website, it's pretty neat.

P.S. I didn't get the DJs name, but she did play Blind by Hercules and Love Affair and i want to thank her for that. It's always nice to hear some good indie mixed with some of the more popular and recognizeable tunes.

Despite the less than stellar weather, Sir Drake showcased their conservative chic apparel in an immaculate fashion. The entire event’s aura was extremely tasteful while a rather modest approach was maintained. The vibes of the event perfectly harmonized with the aesthetic of Sir Drake’s apparel and representatives. The presented apparel could easily be deemed as luxury oriented with such items as yacht hats, suspenders, and absolutely remarkable polo’s but a sense of expression was interwoven into the clothing.

Sir Drake’s polo shirts differed from the usual by not having a customary logo stitched onto the chest. Although this may not seem as such an epic notion to the fashion negligent, it is quite ingenious and serves as a trademark of sorts to the young brand. An array of different insignias can be found on Sir Drake’s polos from flying pigs and sheep to choppers and pistols. The gnarly thing about the alternative emblems is that they represent different concepts like “freedom” & “responsibility.” To top it off, every representative from Sir Drake that I had the pleasure of meeting was extremely courteous, humble, and seemed absolutely enthralled in love of their profession and product. Furthermore the event was extremely social and festive with a plethora of color. Blue & Cream is a very debonair establishment that somehow maintains a “downtown” vibe. The crowd was quite diverse in the sense that established businessmen were freely mingling with “downtown” and “urban” fashionistas.

Drinks, provided by Svedka, were in complete rotation with everyone enjoying not only the presented fashion, but also themselves. A good time was had at this event and the utter juxtaposition of conservative highbrow and sheer humility makes Sir Drake a name to look out for. By the way, if you’re ever on the Bowery be sure to step your game up and check out Blue & Cream.