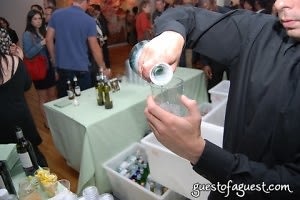 The proof is in the glass; 140 proof that is. Last night rockers, downtown royalty, models, free lovers and Absinthe groopies gathered at Gallery 151 on Wooster St. to fight against the fight AGAINST drugs (LOVE that!). The Drug Policy Alliance (DPA) sponsored the so called Absinthe Legalization Celebration which was a total hit. The DPA believes that “the war on drugs is doing more harm than good”. Keeping in line with “what you resist persists”, the DPA is actually smart. Don’t fight the negative, embrace the solution. And just what is the solution: not punishing people for what they put into their bodies, but only for the harm done to others as a result of putting substances in their body. So what does this mean? BREAK out the Crack Pipe!! Probably not; after all, this was just a classy party for Absinthe.

The DPA is pretty cool, they seek to “Fight for drug policies based on science, compassion, health and human rights. Our work spans issues from medical marijuana to youth drug education. We work to ensure that our nation’s drug policies no longer arrest, incarcerate, disenfranchise and otherwise harm millions of nonviolent people, especially people of color.”

So they think the WAR on Drugs is harmful, but they are FIGHTING for compassion, health and human rights. I’m not sure about the fighting part – why all the fighting. Have a glass of Absinthe and break out the LOVE. Regardless, the event was a total fun success.