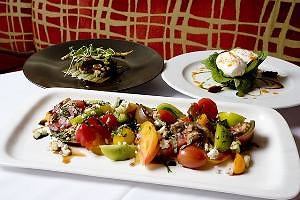 Poise your forks and get your napkins in place, because NYC Summer Restaurant Week is returning for its 20th anniversary season.  From July 16 to August 10, epicures can enjoy discounted dining at some of the city's top-rate restaurants.

Restaurants including Tribeca Grill, Gotham Bar and Grill, The Palm, Delmonico's and Mesa Grill have participated in NYC Restaurant Week since its inception in 1992.  At that time, foodies could enjoy prix-fixe fares for less, with lunches priced at $19.92.  Still, as event producer NYC & Company noted, despite a 64% increase in the average meal cost in NYC since 1992 (from $25 to $41), Restaurant Week meals prices have risen by just $4.15 (and not at all since 2006).

Whatever the cost, you know that we'll be embarking on a 20-day epicure adventure come July 16, chowing down on these three-course meals until we enter a state of Michelin-approved food coma.

Online registration for this year's NYC Summer Restaurant Week begins on July 9, at which point you can further whet your appetite with a full list of participating restaurants.