We receive emails and comments all the time from readers who turn to our (not inconsiderable) knowledge of NYC for advice, so we've decided to take time out of our busy day of internet surfing to answer questions. Today: Reese is sending off her party-girl, "scene"-hating friend.-

"DEAR GUEST OF A GUEST:

We're having a relatively small night of drinks to send off a friend. Looking for somewhere in Manhattan, preferably downtown, cheap, and not a scene.

Our friend is an awesome party-all-night girl who makes friends with every bartender she meets, but hates all things chic or loungey..."

Ok this question is exciting because, well, it's not every day we encounter people who "hate all things chic or loungey." Also: someone's LAST NIGHT IN NEW YORK? Oh, the pressure! 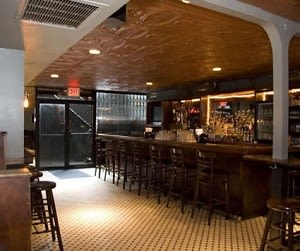 It's pretty much a given in New York that the farther South, and East you travel, the less scene-y things get. Arrow Bar on Avenue A isn't completely out of "hip" territory, but it's so far managed to fly pretty under the radar. (Though not quite as under the radar as the picture at left suggests, of course...)

This basement bar is pretty much your typical alphabet city dive bar, which is to say cheap and fun with really great music.

The bartenders can be a bit surly, so it will put those "charm the bartender" skills to good use.

Special Bonus: There's a photobooth, so your friend can make photo memories of all her New York friends to take with her. 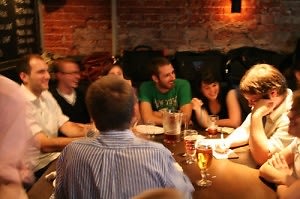 It's situated near a bunch of "chic"er places (like Wine Bar and Belcourt", but Dempsey's manages to steer clear of any pretension whatsoever.

Dempsey's is a good, old-fashioned, grab a beer and a barstool type of place. There's a pool table, and the occasional trivia night, but beyond that, not much else in terms of flashy entertainment, which we gather is exactly what the Goodbye Girl is looking for. 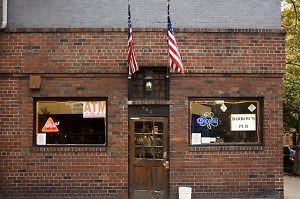 You totally didn't think there'd be a West Village bar on this list, did you? Take our word for it, Barrow's Pub is not scene-y, not pretentious, and not expensive. It's just...awesome.

Super cheap PBR, (and, Blue Moon, if you're picky), good crowd of locals (especially when NYU isn't in session), a jukebox and a pool table.

And. AND! They make pizzas there. It's adorbs. (And we mean that in a cool, masculine, dive-bar type way...) 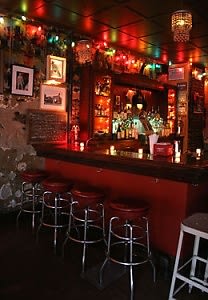 It's not just that we're suckers for anything decorated with Christmas lights: any bar-goer worth their (margarita) salt knows and love Mama's bar on Avenue B for their $5 margs, occasional $20 all you can drink deals, and utter lack of pretension.

Granted, it's definitely an indie crowd (uhm, it's Alphabet City) but people tend to be friendly and welcoming, and there are usually enough seats for everyone.

You can find the usual EV Dive Bar staples there (Big Buck Hunter, pool, darts), and the drinks are stiff.

Bonus: Go there early for happy hour, and stay late enough to make it to happy hour #2 (from 2 to 4 am.)