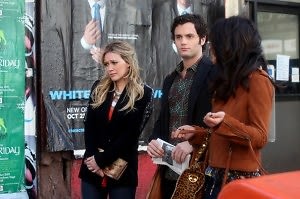 NYU's newest freshmen, as seen on Gossip Girl, have started the school year off right, wall papering their palatial dorm rooms, picking out books for their classes on generic topics such as "Women In Literature", and throwing raging roof parties where miraculously, nary a Freshman decides to jump off! Except, wait, if NYU was really like that, then the Olsen Twins wouldn't have dropped out after a year. Click below to see the ways Gossip Girl NYU is similar to the real NYU, and the many, many ways in which they differ.

It is completely unbelievable that the characters on Gossip Girl are real NYU freshman, because anyone who has matriculated at NYU, nay, anyone who has even walked through Washington Square Park in early September knows that NYU Freshmen can be clearly identified due to the I.D. badges they proudly wear around their necks on a purple lanyard for the first week or so.

Blair, Vanessa, and Georgina live in "Ehrlich Hall", which, based on establishing shots is probably supposed to be Rubin Hall on Fifth Avenue. The outside looks comparable. The inside? Please. Their room is bigger than some lecture halls at NYU.

But the boho/street fair wall tapestry Georgina wants to hang on the wall? So spot on. I had two. The only thing missing is the big map of the subway system that everyone "creatively" hung on the wall.

OK, NO ONE at NYU would skip out on free food and alcohol in order to watch a movie, ESPECIALLY if it isn't a movie they themselves were either starring in or wrote. An NYU Film major would go to Blair's party, stock up on sushi, get really drunk, hit on her, get stoned...and THEN go watch Michel Gondry bootlegs.

Dan's writer's group is meeting at a coffee shop....but it's not Think Coffee?! Definitely not NYU.

Serena freely wandering the dorm halls in search of Blair? Yeah, no. NYU Guards would have gunned her down before letting that happen. You need about ten forms of I.D. and an actual student accompanying you to get into an NYU building.

And lastly...a party on the roof? Do the writers realize NYU students are discouraged from even nearing the bannisters in the LIBRARY?

Dear Writers of Gossip Girl, I'm not criticizing! You're spot on with the pretentious artsy talk, and criticizing professors because they're "old".  But for real, can we get an RA in the mix? Because watching Blair Waldorf and Georgina fill out a "Roomate Agreement Form" would be priceless.

More photos from the set below! 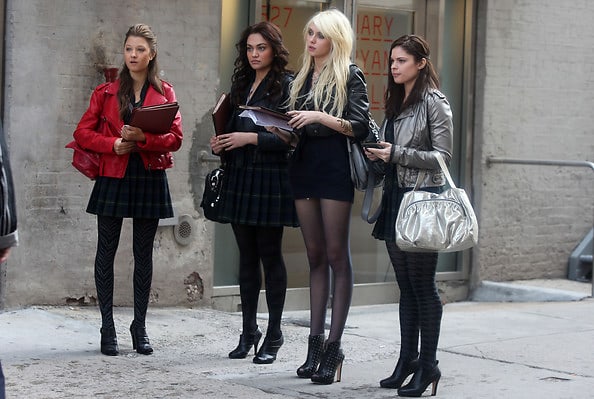 Looks like Little J has found a new crowd... 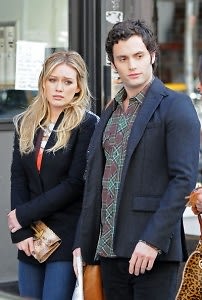 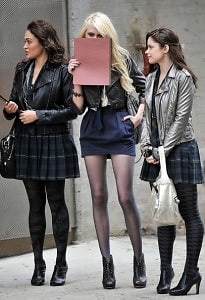 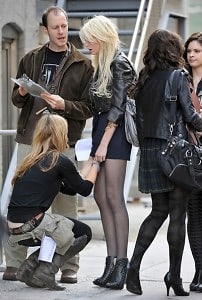