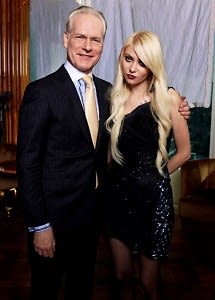 Taylor Momsen took some time off from flashing her under-aged goods to put on clothes and return as Jenny Humprey on Gossip Girl. Her behavior on set pissed off Tim Gunn, starring in a cameo role as himself, who called her a "diva" after filming. "She was pathetic, she couldn't remember her lines, and she didn't even have that many. I thought to myself, 'why are we all being held hostage by this brat?'"-

And thus the verbal war began. The episode aired for the first time last night and instead of angry chemistry filled with hate and rage it seemed...

Blah. Flat and unrehearsed by both parties. Sure Tim isn't known for his animated expressiveness, but I still think he could make it work better than this. In this clip it seems like neither know their lines.  Jenny/Taylor seems bored, possibly hungover.

Jenny is having an interview with Tim to help her get into Parsons. She must show him her collection, but OMG, it's been defaced by Blair's friends to spell the word "Whore." Not so high fashion. Tim is upset, but Chuck invites Jenny to an Observer party at the Boom Boom Room and Tim happens to be attending (along with Ivanka Trump and Jared Kushner in cameo form).  Jenny is able to apologize and the scene comes off better than the first with slightly more emotion and an underlying edge of strain between the pair.

But unless you were looking for something, you probably wouldn't see it. Would you agree? Was Tim's performance zombie-like even for him? Have I merely forgotten how stiff Taylor can be when restricted by pants?