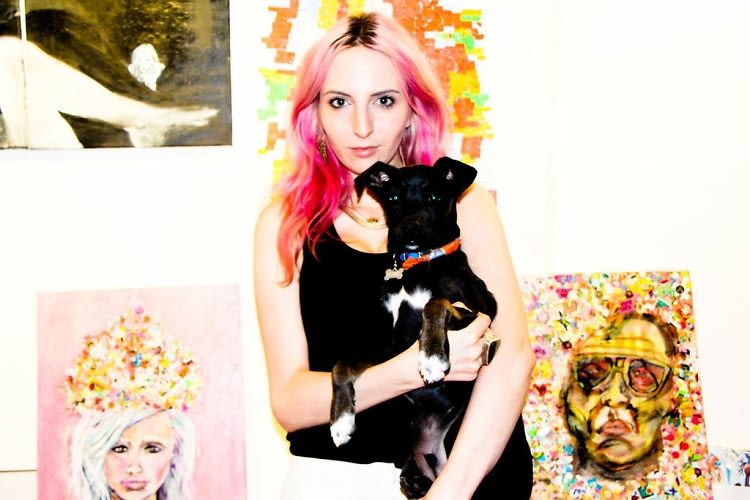 We can all agree that the best way to be greeted—ever—is by a puppy licking your face. And that's just what happened on a recent boiling day in NYC, after we weaved our way through Tompkins Square Park to meet up with Eddy Segal. When we reached the Alphabet City artist's lair, her new pup, Bowie Bolan LaBeija (named after the iconic glam rockers and a Paris is Burning character) had no qualms about getting up close and personal. It's a trait he must have inherited from his expressive mama Eddy, the 24-year-old artist whose painting career is just taking off.

Fresh from her horse farm in rural Pennsylvania, Segal moved to the city when she was 18 and has since remained on the downtown scene, falling in with the rockers, artists, and drag queens who keep the Lower East Side alive. Her published photography of L.E.S. staples such as Kayvon Zand and Semi Precious Weapons has led her to glitter and glamour—and even a few run-ins with Gaga. But these days, the chameleon creative and art editor of IN*TANDEM Magazine has decided to "come out" as a serious painter, a decision that, after spending time in her eclectic, relic-filled studio apartment, we can't help but deem appropriate.