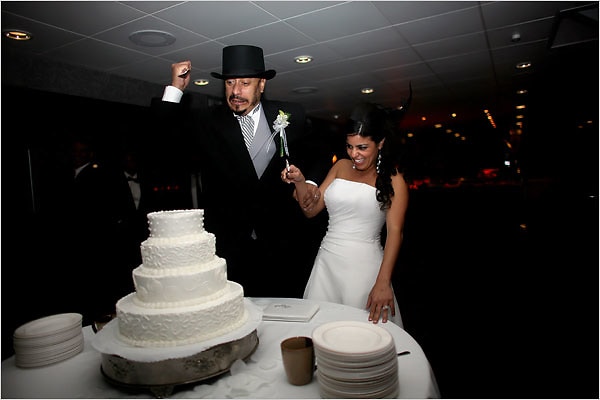 [Yana Paskova for the NYTimes]

Let's take a look at the weddings that made the headlines this week. Do you know of a fun, interesting wedding? Drop us a line and let us know about it!

[Introducing Guest of a Guest's "The Wedding Party"]

Dr. Rachel Steward and Peter Lord Moreland (pictured above). Though self-described as “old, fat and bald,” Mr. Moreland overcame the 20-year age difference between the newlyweds with a combination of energetic Salsa moves and musical artistry (as Peter Lord, he fronts the Family Stand, and has written hit songs for Paula Abdul).  What proposal wouldn't be sweeter with a custom-written song about your intended? (delivered on a carriage ride through Central Park). They were wed on March 7 on the yacht Cloud 9 at the Skyport Marina.

Emily Farber and David Joslin. Married Thursday afternoon at the (new) Manhattan Marriage Bureau, with another ceremony planned on the island of St. Bart’s. Emily is a vice president for marketing in the wealth management unit of Barclays, the British bank. David is a vice president in the mergers and acquisitions group of Alliance HealthCare Services, which provides services and leases medical equipment. He is also the president of InSight Radiology Puerto Rico in Canóvanas, an owner and operator of radiology facilities.

Motoko Sakurai and Harry Davis Taylor. Married on Saturday at Vizcaya Museum and Gardens in Miami.  Motoko is the director of merchandising for shoes at Louis Vuitton, North America, having graduated from Princeton.  Her father is Japan’s consul general in New York and is to become president of the Japan Society in New York next month.  Harry specializes in investing in technology companies at TA Associates, an investment firm in Boston, and graduated from Hamilton College.