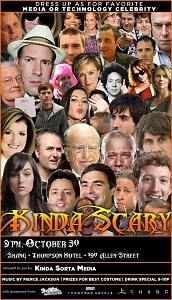 Whether you decide to go as a bloody rare Lady Gaga, channel your inner Taylor Momsen, or maybe as your favorite New Yorker, you can't get dressed up without a party to go to!

Details: Black attire a must & open bar! When: 7:00pm-11:00pm Where: American Apothecary Showroom

The Bowery Hotel Presents Ghosts of New York Details: Celebrating Halloween and the world premiere of Nigh Home, a film by Gary Breslin. Join hosts Johnny Christ, Laura Cooper Brown, Brooke Geahan, Gary Breslin, and Brian DeGraw. When: 11pm till "very late" Where: The 2nd floor of the Bowery Hotel

House of Horrors at Santos Details: Guests include DJ Cobra Starship and Taryn Manning with a live performance by Eddie the gun. When: Doors open at 9pm Where: Santos Party House

Back to the Booya Party at Spin NYC Details:Hosted by Wally Green + Music by DJ Scott Durday of the Soundmen When: 9:00pm-2:00am Where: SpIN

Not Your Standard Bingo Details: Costumes, prizes with the Boom Boom regulars When: Invite Only Where: The Standard Grill

Village Halloween Parade Details: Great way to celebrate without being in the crazed mix! Day of the Dead traditions too When: Sun, October 31, 6:30pm-8:30pm Where: Spring & Sixth Ave to 21st & Sixth, New York, NY