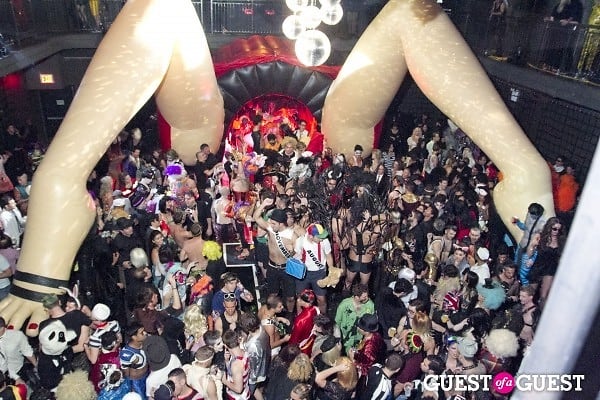 Hands down the biggest, craziest party this past Halloween weekend was A Haunting Fascination at the Hudson Hotel. If you were aggressive enough to elbow your way through the crowd of zombies and sexy Chilean miners at both the main and Good Units entrance, you were in for a good time...and more pushing.- 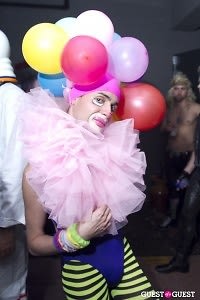 Bloody cheerleaders, dead rock stars, pretty clowns and the obligatory Lady Gaga or two were found scattered throughout the space. I spent most of my time in the Library Bar, by far the least crowded area and the one with the shortest line at the bar. Andrew Bevan of Teen Vogue held court to models and socialites in a Karl Lagerfeld costume while others danced to tunes by Paul Sevigny and later to '50's songs like "Hang on Sloopy." The only thing that put a momentary stop to the festivities was when a girl dressed in black sat on the edge of a table holding a massive Avion Tequila ice sculpture, causing the whole thing to topple and land on her. While it seemed to happen in slow motion with her head cracking on the ground and her body being squashed under pieces of freezing ice, those nearby where quick to lift her up and get her out of the room. We hope she's OK.

Next door in the Hudson Bar, La Roux played what according to Twitter was an "Amazing" DJ set. Unfortunately, I was stuck in the overly crowded hallway, smashed between Super Mario, the Mad Hatter and an indistinguishable costume of sexy nature trying to get past the wall of a bouncer who was refusing to let people in or back out the way they came through the outdoor courtyard. In what could only be labeled "Stupid Idea," people had to push their way back from the front of the line to circle around to the other entrance to encounter another surly bouncer. The truthful pleading of  "I have an open tab! My card is at that bar," only took about ten minutes to garner me access back to where I already was.

From the conversations of people who had ventured their way up from downstairs, the real craziness (of the non over-zealous security guard variety) was happening in the basement of Good Units where nightlife legend Susanne Bartsch and her cohorts were holding an insane bash.  Guests who entered through a vagina (because nothing says "Happy Halloween!" like metaphorically exiting the womb?) were treated to more naughty parts in the form a few naked guests and a nude burlesque performer making herself into a hot fudge sundae complete with whip cream.

Apparently the party was a bit too hot and the mass of glamed out revelers too large. Geraldine Visco, NY Press Nitelife columnist and Village Voice's 2010 Bravest Nitelife Photog, Tweeted: "Bloody Mary in Good Units/Hudson Hotel SUCKED! NYPD+NYFD shut it down for overcrowding. It was a death+fire trap. Hudson security=FASCISTS!" When we called the hotel to find out what happened there was no answer but we did hear later from Geraldine that it was shuttered around 1am and was "mass confusion."

Were you there? What happened? Anyone get arrested? Let us know.

On Friday, party goers at Yonni Goldberg's 6th annual Halloween bash at Good Units were more lucky. There was no interference by the cops and Lil Kim stopped by dressed as a cat, stopped by to give a surprise performance.