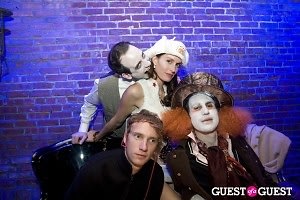 So you stopped trick or treating ten years ago, but let's face it, Halloween has somehow become a bigger, more drawn out deal than it was when we were kids. Whether you love it or you hate it, here's a scavenger hunt that will hopefully keep you entertained all night long...-

Every time you see a costume that is some sort of pun (like the loan shark pictured at left), 15 pts.

If you spot someone dressed like a cast member from Glee 5 pts.

If you spot someone dressed like a cast member from Glee's GQ shoot: 10 pts.

Someone dressed as Lady Gaga a fake meat dress. 5 points.

Someone dressed as Lady Gaga in a real meat dress. 100 points.

If you spot someone dressed like Christine O'Donnell in a lady bug costume. 10 pts.

If you spot someone dressed like Christine O'Donnell in a lady bug costume, and this person is a man. 15 pts.

If you see someone with a box of Coca-Cola on his head and you can't see his face and he's going as Christine O'Donnell's one night stand: 5 pts.

The ENTIRE cast of Jersey Shore, together, every single one: 20 pts.

Every time you see someone at a party NOT dressed in costume, or with a lame mask that they AREN'T EVEN WEARING, -5 points. Cause they're ruining Halloween for everyone.

Every time you see a fog machine. 3 pts.

Every time you see someone who has managed to find some sort of costume that is literally just underwear. 10 pts.

Every shot taken that is either bright purple, lime green, or black. 10 pts.

Every girl dressed as Audrey Hepburn from Breakfast At Tiffany's. 5 pts.

Every girl actually dressed as Breakfast, At Tiffany's. 20 pts.

If your Halloween activities include something actually scary, like a graveyard, real Haunted House, abandoned mansion (somewhere? maybe?) 25 pts.

Going to the Halloween Parade, or being anywhere near the West Village on Halloween and making it out alive: 100 pts