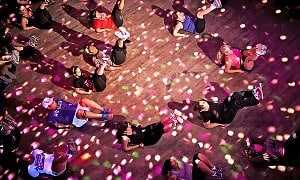 When choosing between happy hour or going to the gym, most of us are quick to leave our sneakers at home and head right to the bars, where the most strenuous activity is getting up from your seat to order another drink. It's even harder to find motivation to go to the gym on the weekends, when the opportunities for drinking and partying seem endless. But there's no need to choose anymore! Thanks to the new Party Workouts, we can party the night away-- and burn tons of calories too.

From long waiting lists to carefully selected music to glow-sticks and disco balls, these workout classes offer everything that a club might...without the liquor. Yesterday the New York Times reported on the new trend, writing:

"Party workouts, as many of them are called, attract a range of fans, including gym regulars warding off workout ennui and recent transplants to New York who don’t want to try to strike up friendships in bars. They also lure time-crunched young professionals who have outgrown the club scene — but whose idea of a good night out is a little racier than dinner and a movie." 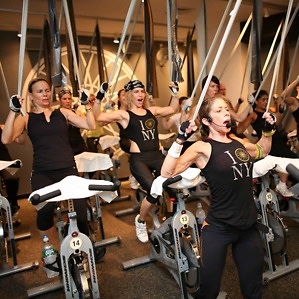 The Dance Party at Barry's Bootcamp (Saturday nights at 7pm, and a favorite of Kim Kardashian's), where party-goers mix treadmill sprints with toning exercises, is one of the most popular Party Workouts, and classes fill up so quickly that you often have to reserve a space weeks in advance. It's hard to believe that people are fighting to sprint on a treadmill the same way they fight to get into the hottest club, but after reading the class description, I'm thinking of signing up myself:

"Why can't you work out and party at the same time? Oh yeah, YOU CAN! Velvet ropes, LIVE DJ, Barry's Bootcamp GOGO Dancers, non alcoholic antioxidant shots and a Disco Ball... Any questions?"

Another class that's tougher to get into than Le Baron is the evening ride at SoulCycle. This 7pm weekend class is held in a candle-lit studio and everyone is served a glass of champagne after class.

Priced between $30-$40 per class, these Party Workouts will cost you as much as a few drinks. But as a Party Workout regular who was interviewed by the Times pointed out,

“I know I won’t regret it in the morning.”

Where to Party Workout in NYC:

Uplift: Raise the Bar; location changes based on class; $40 per class