We've been so busy trying to forget all about High Society after Wednesday night's Season Finale that we didn't even notice Devorah Rose's spectacular response to the finale. Let's just say, she wasn't happy with the final edits, and she wants everyone, but especially Tinsley Mortimer, to know it.-

Her tweets start off as sarcastic....

@MissDevorahRose Wow - nice job making Tins look great and my side on the editing floor per usual. So funny!!!

@MissDevorahRose Such a lie! Nice way to set it up.

@MissDevorahRose Way not to let me talk at all. Ewww. Nice one sided argument!

Then progress to irritated...

@MissDevorahRose Would love Neila 2 twitter the BS abt my name - never did I sign in with another name. The drama was abt my passport not license. So pissed!

@MissDevorahRose Never, ever lied about my name. I am repulsed by this episode.

@MissDevorahRose I am going to publish every email and text. What they did was WRONG. Nice editing job, nice way of twisting everything.

@MissDevorahRose Thanks Tins for txting that we would have a reconciliation at the party then throwing me under the bus - I have that txt and will publish.

@MissDevorahRose Thanks Tins+producers for getting me involved in the fakest, most disgusting bs ever. You twisted the name thing and lied abt the fight

And finally end in a dizzying climax of pure, unbridled FURY...

@MissDevorahRose You can look forward to reading txts where Tins promised a reconciliation not a fight. My side was not heard and the editing is absolute BS

@MissDevorahRose As far as the "name" thing goes - Tins/producers took that from retarded negative press about me and spun it to make her look good.

@MissDevorahRose I have evidence as well that I never checked in with a "fake" name. I hope you losers who lied to me are happy bc you won't be for long. xo

@MissDevorahRose @tinsleymortimer I'll be publishing your txt in which you said we were making up at the Guest of A Guest party. You are THE FAKE.

@MissDevorahRose @tinsleymortimer I'll be publishing your producer's emails as well. You are DISGUSTING, A LIAR, AND I DON'T KNOW HOW YOU SLEEP AT NIGHT.

And curtain. Wow. So what was Tinsley's response to these accusations?

@tinsleymortimer Me and @jasenkaplan at the Derby!! I went with a smaller red hat. http://twitpic.com/1k4g8u 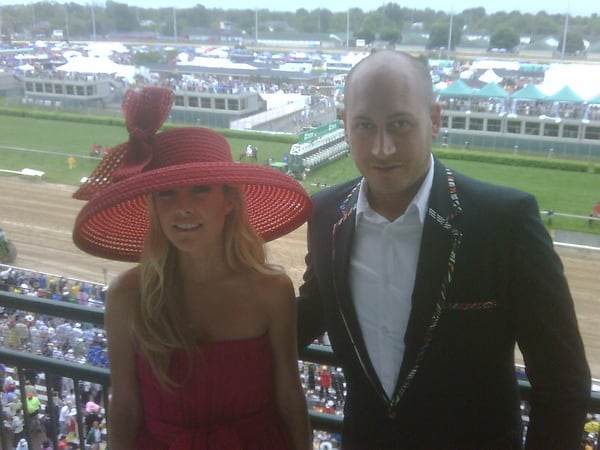 So, yeah, she's pretty broken up about it.