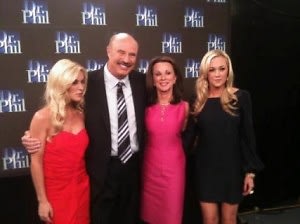 The episode kicks off with three of the most dreaded words in contemporary American life: Girls Night Out. Sisters Tinsley Mortimer (for now) and Dabney Mercer are the girls in question. The show abruptly cuts to a LA PERLA commercial before we see Tinsley and Dabney jumping on a bed at the EMPIRE HOTEL: The Only Hotel In New York. Things get better from there as the girls order grilled cheeses, french fries and chicken fingers from room service. They wash it down with champagne. I have nothing to criticize here.

Arteries righteously clogged, it's time for some sisterly tough love. Dabney, like a Southern version of Cher, basically tells Tinsley to snap out of her divorce- and The Midtown-inspired funk. "Step it up," she says. Then she slaps Tinsley across the face, vigorously shakes her shoulders and heaves her into a bath full of ice. Tinsley wakes up with a missing kidney the next morning and spends the rest of the episode tracking it down in the black market underground of Sunset Park's Chinatown. 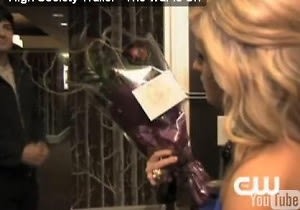 Time for budding U.N. ambassador Jules Kirby. She is, as always, alone. Ensconced in the EMPIRE HOTEL: The Only Hotel in New York, she calls a cleaning lady because she puked on the floor during a McGriddle and King Cobra binge the previous night. She is in desperate need of detox. But her usual spa is fully booked. This is what passed for drama on last night's exceptionally boring entry in this series!

We cut to Paul's apartment on the Upper West Side. Somewhere, Whit Stillman weeps into a dry martini at the thought of a self-proclaimed socialite living in Zabar's territory.

Back to the hotel. Is Jules ever with anyone? Then on to the Four Seasons, an establishment I'm actually shocked permitted CW cameras. Paul and Debbie Trachtenberg meet up. They double kiss, as Newton, Massachusetts and suburban Jersey custom demand they do.

Jules takes a dump in the sink of her hotel suite. She complains about the toxic smell that results. Fed up, Empire Hotel manager Mark Houston kicks Jules out of his establishment. Despite Jules' best efforts, the cameras capture every moment of the fiasco.

This episode was really all over the place. The main characters have very little to do with each other when not throwing drinks (or plastic cocktail glasses--klassy) in each others' faces.

Paul and his hand model boyfriend Tommy go to an empty nightclub in Chelsea. They party like it's  2002 by dancing on banquettes. Tommy storms (more like drizzles) out. They  quarrel on the sidewalk. They argue about their positions in the New York pecking order, which is kind of like Sbarro's and Papa John's batting it out for Manhattan pizza supremacy.

Debbie (aka Devorah Rose) rents some expensive jewelery. She says she loves having a million dollars dangling from her body. That's not the only thing dangling, if the rumors are true. 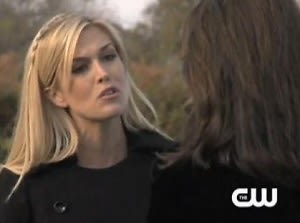 Tinsley heads to Newport to confront her mom Dale. Dale frets that Tinsley's “forays into dating will preclude her” from boring society parties. I'm pretty sure she should be more worried about this show. Tinsley and Dale gawk at a painting of Alva Vanderbilt, a society fixture who "never returned to what she had been before her divorce. Most portraits were shredded." We cut to a magnificently well-preserved portrait of a luminous Jules Kirby beaming from the corner of a dark, cluttered attic.

But Tinsley didn't come here to ponder history, art or Wilde. She came here to stage an argument with her mother. And so Dale and Tinsley walk out to water's edge on a sprawling Newport lawn. Because in the heat of the argumentative moment we all instinctively position ourselves to be framed by moored yachts and seaside estates.

Why did Dale side with her daughter's estranged husband? “I was trying to save you Tinsley.” 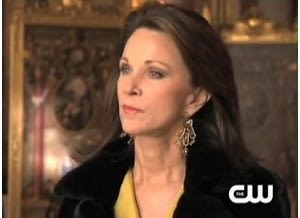 Luckily, Wednesday night TV viewers have more than two choices. And last night, I believe more chose a Touched by an Angel marathon on Oxygen.