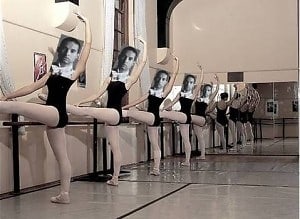 High Society, the show that follows "socialite" Tinsley Mortimer and her crew of fame whores around NYC, hasn't been canceled yet. In fact, the show charmed us all for the third time last night with an episode titled "Plus One"! Here's what went down on As The World Burns.

Tinsley does her best Cher Horowitz and rambles on via Valley Girl voice over about her divorce and searching for stability. Fanny the Housekeeper shows up to Tinsley's loft in The Midtown. Fanny, a Park Avenue veteran, is clearly horrified by the downgrade. She also knows more about Tinsley's soon-to-be-ex Topper than Tinsley does, but refuses to give Tinsley the dirt. Jules Kirby would cut a bitch for this sort of subversion. 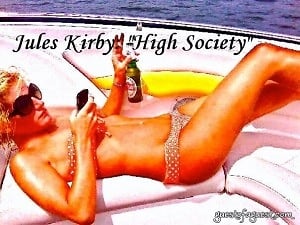 Speaking of, the show cuts to Jules in her EMPIRE HOTEL suite. A half-finished screwdriver sits by her blaring alarm clock. But Jules is too drunk to hit the snooze button, and continues to cuddle with the fur of that collie she skinned last night in a coked up rage. Which is worse: an adult woman killing a puppy or an adult woman who still sleeps with a stuffed animal? Jules calls up the hotel manager (his face is blurred, which is the only thing that might suggest these Empire sequences aren't totally staged) to clean up the mess from her Funyuns and double bacon cheeseburger binge the night before. Unluckily, that's the last we see of Jules this episode.

Luckily, we get Paul Johnson "No, Not That Johnson & Johnson" Calderon. We meet Tommy, a failed catalog model who only signed on to this garbage in the hope that some Elite scout would see the abs he routinely flashes on the program. Sorry Tommy, but you're a bit long in the tooth for the modeling thing. Paul and his chicken legs attempt to run on a treadmill. He falls off. Then, he gives us the best scene of the episode, some Pirouettes (see photo above). Those legs are good for something. He also falls off a blue physio ball. Something tells me it wasn't the only blue ball that hurt Paul that day. Anyway, Paul's gym time before this was limited to happily bending over for some towel-snapping sessions in the musky St. Paul's locker room, so I'm glad he's starting to take fitness seriously.

Crap, Debbie Trachtenberg/Devorah Rose is going to get some screen time after all. Debbie tells us he's the editor in chief of Social Life magazine, which he swears exists. He absolutely cannot walk in heels. He says he empowered Tinsley via a fawning Social Life profile No, Debbie, Tinsley's failed marriage gave her whatever uptown power she had five years ago. Time for the cast to welcome Debbie! Paul calls Debbie a "trollop". Jules says Debbie is "abusing the socialite title" and she would know. Debbie says Jules is a racist and a homophobe. He says he would "rather swim in vomit than sit next to" Jules. From the looks of Debbie's jutting clavicle, I'd say vomit isn't hard to come by. The camera cuts to an exterior shot of Debbie's lair. It looks like a mid-rise in Tulsa. 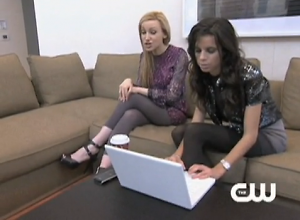 Back To Tinsley. She's rattling on about her handbag line. Handbags are the do-nothing fauxcialite "job" du jour, so this makes sense.  The bags are for poor people. Tinsley hates polyester ("It's a word where I cringe when I hear it"), but if it means peons can afford her horrible bags, she's OK with it. In the fabric store, she drops her phone and says she "won't be able to survive" if it breaks. Quick, someone smash Tinsley's phone. In the next scene, Tinsley pretends her bags are made by full-grown Garment District garmentos instead of Cambodian toddlers. She says she wants to sell her bags in "boutiques all over world." Jules pretends to own a boutique in France. I smell synergy.

Tinsley's mom Dale Mercer visits her disgraced 42-year old daughter's loft in The Midtown. Dale musters whatever she can of a smile after that fresh Botox injection upon entering the dump. She doesn't like what Tinsley's done with the place.  Doing her best Oda Mae Brown, she says she "felt the presence of" Fake Prince Casimir in Tinsley's place. Eh, Dale might be the only one of this lot I can stomach. If the Southern gal just Blanche Devereaux'd it up a bit she'd be "golden." 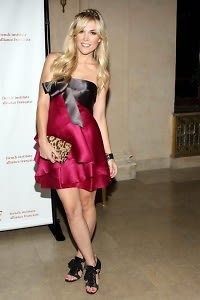 [Photo via PMc] Black Tie Charity Event time! Tinsley shows up at a Black Tie Charity Event. We don't know what Black Tie Charity Event it is, because the Black Tie Charity Event obviously reneged on its deal to be on this show once the folks behind it saw the first preview clip. We get product placement. Tinsley is wearing a MARCHESA dress and YVES SAINT LAURENT shoes. I think I just saw the reanimated corpse of Liz Smith talking to the Tinz. Casimir, who looks like Artie Lange after a rare shave, joins Tinsley in the otherwise empty ballroom. Tinsley voice overs that "everyone is looking at us" in said empty ballroom. "Like my [ridiculous, hideous] braid?" she asks Casimir. No, he doesn't. Note that this is the comb over braid Tina Fey rocked as a parody of desperate trendiness on 30 Rock. There's a stepladder in the middle of the ballroom. It looks like Grand Central, post-rush hour.

Here comes the most scripted scene of the episode, and that's saying something. Dale disrupts the Black Tie Charity Event because she hates Fake Prince Casimir and knows her 58-year old daughter is with him. Duh, a producer told her two weeks ago. "Please go, mommy!" Tinsley demands. Tinsley really can't act. She might have to skip the made-for-TV phase of her "career" and jump right into a "leaked" sex tape to stay relevant. Actually though, Dale might have Daytime Emmy nomination potential. I've seen worse than those botulinum tears.

We get some quality Dale voiceover narration. "As I looked over to my right, to the darkness beyond, I saw Casimir." Dale pulls her best Norma Desmond and staggers around the cavernous empty hotel in her gown in search of Artie Lange. She finds him just as viewers find a cameraman standing in the dead center of the frame. Nice going, CW.  Tinsley witnesses the confrontation between Casimir and Dale. Dale says we, the dozens of loyal viewers, "couldn't imagine the look on her face of chagrin and horror." We don't have to Dale. It was just shown on screen.

And then Bye, Society approaches telenovela territory when, in an inspired last minute call from the boom mic guy, Dale bends at the waist and wipes fake tears away with the train of her gown.

Next week's preview: Hey, we're going to be on this show! If only we got paid!