We all have a dumbest friend. We stick by her out of loyalty, shared history, and slightly pitying affection, but we all know that she's as dumb as a sock full of batteries. HP's advance screening of Sex and the City at the Paris Theatre made it very clear that Sex and the City II is achingly dumb, but that we will stick by the franchise to the bitter end.

Spoiler Alert: Don't Read On If You Want To Actually Be Surprised By This Movie

We can report that the film is  way over-long and, predictably, kinda bad. The plot is half-assed - although you won't be seeing this movie for the plot, unless you're the kind of person who eats donuts for the protein. And yet we don't really care about the flick's failings, because the movie's a lot of sparkly, girlish, familiar fun.

So what does SATC II: All Your Sex Are Belong To Us have to offer? Well, the gals spend most of the film, as you doubtless already know, in Abu Dhabi, where they talk a lot about the stresses of their lives stateside. Carrie's having boring marriage ishes, Miranda's having work panic, Charlotte's fretting about her bra-less Irish nanny, and Samantha's terrified of growing older. Luckily, there's full dorsal male nudity, camels, a very flamboyant wedding, some very effective nipple-age, painful puns ("Lawrence of My Labia"), and Patricia Field's acid dream costuming (Carrie's cracked tiara/playing card bridesmaid hat comes to mind, as does Samantha's confusing beaded swimsuit and Miranda's aggressively heavy necklaces). This is right before the "Lawrence of My Labia" joke. It's the calm before the storm.

Here's our real-time diary of the showing, a record that's about as disjointed and farcical as the picture itself. No spoilers, we promise.

:12 - Crying! This is the first crying jag, but not the last. There are four significantly teary scenes over the course of the movie. Teary adult scenes, that is; Charlotte's youngest child shrieks throughout the entire flick, and looks like an angry squash-faced goblin. We hate that kid.

:15 - Liza Minelli appears, pantsless, and sings "Single Ladies" with two Liza lookalikes. They all do a faintly Fosse-esque version of Beyonce's dance. This is the high point of the film.

:16 - There is an audible, primal shriek of "LIIIIIIIZZZZAAAAA" among the background noise of the movie.

:37 - Big makes a terrible anniversary present gift. Then he asks a wise question: "Did I fuck up?"

:40 - Miley Cyrus, less annoying than ever before, saves Samantha's ass. 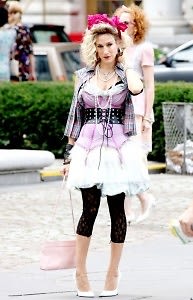 Blink and you'll miss the much-hyped flashback sequence, but Miranda's alien-dilophosaurus-bowl-haircut makes it all worthwhile.

1:05 - Carrie arrives in Abu Dhabi in a bejeweled turban, because Orientalism never goes out of style. Then she puts on a one-piece patterned jumpsuit with harem pants. We viewed this as ridiculous fashion escapism until we saw a young lass wearing almost the same thing at the Bergdorf Goodman afterparty.

1:10 - God bless Kim Cattrall. She gets a lot of the stupidest lines, but somehow makes them work. Also, she really does look great, you guys.

1: 18 - Carrie appears in a giant taffeta skirt, a "J'adore Dior" babydoll tee, and sunglasses that she holds on a stick. Spontaneous laughter from the theater audience.

1: 23 - Some important cultural lessons, via the Abu Dhabi vacation: Arabia is awkward! Burkinis are funny! What's up with those crazy Middle Eastern foodstuffs? Thank god for kindly, elderly shoe vendors!

1: 28 - SATC II drops a knowledge bomb on us: Gay Arabs are even funnier than regular Arabs! Thanks, SATC II!

1: 30 - Samantha is wearing a dress with attached epaulettes. The epaulettes are bejeweled. And spiked.

1:34 - There's a poignant breeze of feminism when our quartet of ladies sings "I am Woman, Hear Me Roar." They sing the whole song. The audience joins in. Our eyes actually wet themselves at this point, no joke.

1:34 - The New Yorker reviews Carrie's book. We call shenanigans. The New Yorker would never review Carrie's book, because Carrie is an idiot. If we recall our voiceovers correctly, Carrie writes things like, "Where do we draw the line between gold-digging and just plain digging?" and "If a single woman falls in the forest, does anyone tell her how nice her leaves look?" In other words, Carrie has the literary skill of a young, stoned chimpanzee.

1:36 - Carrie heads off to an ill-considered dinner with a certain someone (AIDEN AIDEN AIDEN) in a very high-slit dress. "Jesus," whisper two different people seated near us.

1: 47 and 2:17 - "You're not like other women," Aiden tells Carrie. Thirty minutes later, Big tells her, "You're not like everyone else." This idea, that Carrie is a miraculously atypical example of womanhood and that her three caricaturized friends are the three archetypes of womanity, is one of the greatest fallacies of the series and subsequently the movies. Carrie is not a beacon of uniqueness, because women do not easily fall into the categories of The Slut, The Career Woman, and The Traditional Sweetheart.

1:48 - Fine, we'll admit Carrie isn't like anyone else, in that she's a bigger idiot than everyone else.

1:53 - Miranda and Charlotte are having bonding time. We can't remember having ever seen them truly bond, either on tv or the silver screen, and so we're quite pleased. Friendship forever.

2:05 - Climax! Angry Muslim men! Veiled ladies! Illegal goods! Running around! Fashion as the universal language! Samantha throwing condoms around like there's no tomorrow! And, of course, a Birkin bag!

2:27 - "True Colors" is the song pick for the final montage. Aw. Our high school boyfriend put that on a mixtape for us around the time that we saw our first episode of Sex and the City.