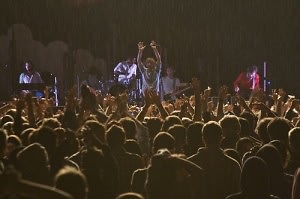 Phoenix, the French indie-pop-rock band that sings in English, headlines Madison Square Garden on October 20th. It's the latest Pitchfork-approved band to snake its way up the ladder from dingy rock clubs to the big stage. The bands are thrilled (and rich), while fans are ticked, and not just with expensive tickets.

Phoenix's MSG gig follows back-to-back Arcade Fire concerts in August.  Graduating to the 20,000-seat venue signals entrance to the big leagues of touring. But it can also turn off early fans who told friends and strangers to check out their latest musical discovery and now wish fewer people had followed their advice.

You can chart the hipster life cycle of a band by its progression through the New York concert hierarchy. Upstarts play to a handful of disinterested drunks in postage stamp bars (think Flight of the Conchords), then break through to the DIY venues abutting Kent Street. A half notch above are "intimate" Ludlow Street joints like Cake Shop, The Living Room and Pianos, which have miraculously survived that strip's gentrification. The lucky few bands left standing attempt to scale the Bowery Presents totem pole: Mercury Lounge, then Bowery Ballroom and/or Music Hall of Williamsburg, then Terminal 5. From there, and with requisite pit stops along the way at sprawling outdoor festivals, the Pool Parties, the United Palace and, for the big guns, Radio City, MSG glory awaits. 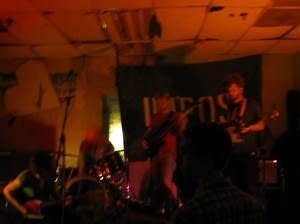 Thing is, the true indie aficionados/snobs wish their precious obscure darlings kept it real, ideally playing to an audience of one in said aficionado's cramped living room. There is no reason to rejoice, only to pout, when the next big thing becomes the big thing and moves beyond the iPods and torrent files of discerning fans living along the downtown-North Brooklyn L Train axis.

There is a hipping point. And for my money, the indie tide turns against surging music acts right around their first gigs at the widely loathed Terminal 5, with its cavernous space, horrendous sight lines and striving patrons.

Aside from this dreaded mainstreaming, there's the fear of what I like to call the Gaga Effect. Lady Gaga never shuts up about getting her start in bars like the Lower East Side's St. Jerome's (a charming dump) and the pint-sized Rockwood Music Hall. The difference is Lady Gaga's unrepentant quest for international Top 40 superstardom.

Still, a flood of new fans of groups like Arcade Fire and Phoenix (and a more under-the-radar opening act like the Dirty Projectors, for Phoenix) actually dilutes their niche popularity. That probably only weighs on the minds of the "first" fans as the musicians step into the MSG spotlights.