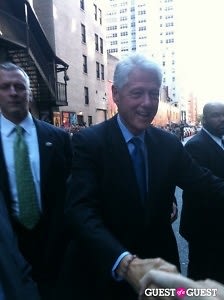 Just when you thought Bubba was over his party fix after throwing Chelsea a posh wedding, Bill Clinton cannot seem to get enough of the big-bash instinct. He has quite the impressive line-up for 2011.

As Life and Style mag reports, Clinton is planning a special concert at the Staples Center in L.A. to celebrate his 65th birthday. The former president, who's expected to perform on his sax, has Angelino A-listers clamoring for a spot at the venue, which can hold 20,000 people.

Paul McCartney, Mary J. Blige, Jay-Z, and Bruce Springsteen have been named as potential participants in the former president's fete.

But Clinton will not be sated with just one concert of celebration; he will have many events surrounding his August 19 birthday with more intimate and exclusive gatherings throughout that week.