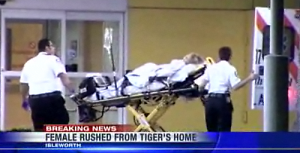 Frankly, we don't know where to start. But we will try. Here goes...

-There are naked pics of Tiger's Wood floating around (see what we did there?)

-Tiger was admitted to the hospital as an Overdose case. EMTs found him unconscious at the scene of the crash and he had to be intubated on the way to the hospital.

-Elin has moved out of the house...for now

-Elin's mother flew to America from Sweden. Then at 2:30am this morning (the same time Tiger had his post-Thanksgiving crash), a 911 call came from the Woods house and a middle-aged woman was rushed to the hospital, apparently on life support. Turns out it was Elin's mother, Barbro Holmberg. We are happy to hear that she is in stable condition.

Thanks Stephanie Wei for keeping us up to date on all things Tiger!