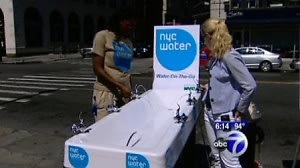 Don't feel like dropping trou just to make it out of this summer alive? The government is here to help.

The first, cooling centers, are outposts throughout the city designed for children, the elderly, those without air-conditioning and anyone who just wants to chill out. Locations can be found by dialing 311. (Alternate option: Find Starbucks. Sit.)

The "Water-On-The-Go" program (which should officially and will henceforth be referred to as "Hydration Stations") places trough-like water fountains (reminiscent of the sinks, water fountains, and, in fact, toilets I experienced during my 2006 trip to China, OH MY GOD COMMUNISM) throughout highly trafficked areas of New York. The fountains hook up to fire hydrants and will rotate locations. The best part? Dog bowls will be provided. Pets get thirsty, too!

No word yet on any plans to cool off the city's hottest spot, subway platforms, a.k.a. the seventh circle of Hell directly excerpted from Dante's Inferno.