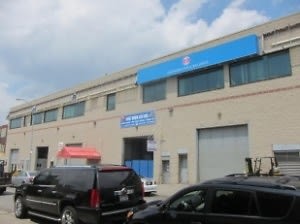 Has the hype of the Meatpacking District got you down? Maybe it's time to spend your evenings in Sunset Park, where a 20,000-square-foot jungle-themed night club is in the works.

The club will be called Panther and function as an Italian restaurant-cum-club (LAVO formula anyone?). Vincent Faraci, who is a former Vegas club owner, has the advantage of a proximity to the Varazano-Narrows Bridge and may be able to tap into that B-and-T crowd.

To a certain extent, the club's location could be something of a lightening rod for city planning. As the Observer states, "Sunset Park is one of the last remaining industrial areas in the city, and unlike places like Williamsburg or Red Hook, the Bloomberg administration has been fighting rather hard to persevere and enhance industrial and even biotech uses in the neighborhood."

The obvious effect of club infiltration into such an industrial neighborhood would be a spike in real estate prices that could reach prohibitive levels for certain demographics and businesses with warehouses and large-scale tech spaces (Gowanus, anyone?).

It will be interesting to see if Sunset Park--a far cry from the city's party epicenter--can actually develop itself into a nightlife hub.