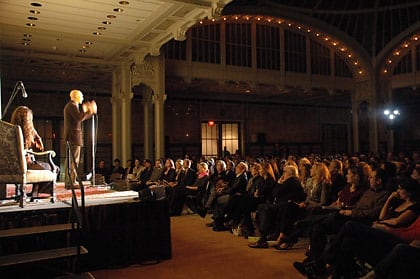 Ah, autumn.  The season of new notebooks and backpacks and pencil erasers.  Of Crayola sets and chalked sidewalks and serious childhood nostalgia (thanks for indulging us for a moment...).  It's back to school season alright, but even if you won't be waiting for the bus come Monday morning, that doesn't mean that you can't still be schooled in the topics that are likely too cool for school anyways.

Our calendars are already filled to capacity with NYC's fall festival line-up, which includes the best panel talks, performances, and more that the pop culture, film, and comedy worlds have to offer. From the New Yorker Festival to the New York Comedy Festival, here are some festivals and arts and culture series on our radar right now!

[Photo: The Moth Ball via]