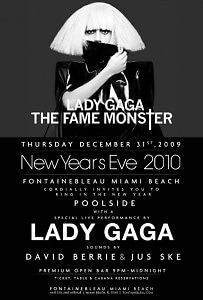 While most Americans hail NYC as THE city to celebrate New Years in, most New Yorkers get the hell out of dodge for the holiday that tends to bring in massive waves of tourists to the city's streets. Miami is an especially popular hotspot.

Many club owners choose to bring their party south to venues like Fountainbleu (hosting Lady Gaga this year), the Delano, the Shore Club, and others. But who will have the better party scene?

Eugene Remm (one half of the EMM group that owns TenJune, S&L and others) is placing his chips on NYC this year. Whether or not these big names (Madonna, Angelina, Tom Cruise) will turn up at his party at S&L as his Tweets imply is anyone's guess.  We will, of course, make sure to check in on all of the parties before and after the big night. Stay tuned.