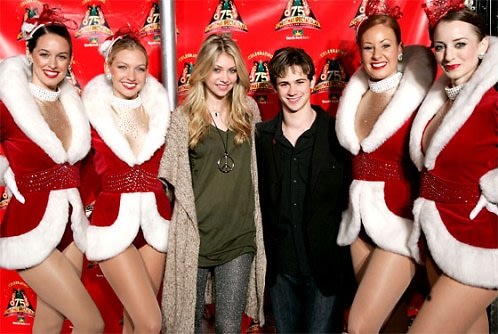 Last night was the Opening of Radio City Music Hall's Christmas Spectacular.  It was also date night for Gossip Girl's Taylor Momsen and Connor Paolo (better know as Jenny Humphrey and Eric van der Woodsen).  These two love birds on the show seem to be buddies in real life as well.  Okay so cute right?  Then I found out that while Connor is 17, Taylor (who plays Jenny) is only 14 years old!!!!  WTF?  How is it that girls look like this these days at 14!!?  I am hoping that Taylor in real life doesn't turn out to be another Lohan. I mean I didn't even know what a blow job was at that age and her character is being basically asked to give them on rooftops to a guy in a three piece suit.  While I really don't know for sure if the two were on a date last night, if it was in fact one, they were being chaperoned by her mom and little sister which is so cute....maybe she won't be our next Lohan.  Don't do it TayTay, the parties really aren't worth it, and you should get to experience enough fabulous times on the set of GG....can't wait for tonight's episode..xoxox.