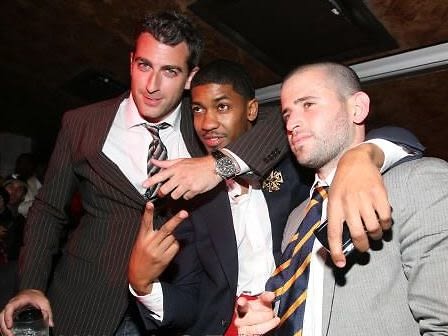 In late August, we started hearing rumors of the TenJune boys looking into buying up the newly "on-the-market" Lotus in meatpacking...Yesterday, the deal was confirmed. Mark Birbaum and Eugene Remm (pictured above), our favorite little birthday buddy duo are taking over Lotus, and thus adding on to their Meatpacking playgrounds collection. David Rabin, and the team behind Lotus, the club that made the area six years ago are officially giving up their reigns and will focus on other projects such as their newly opened Mexican restuarant, Los Dados and the re-opening of their more exlusive joint The Double Seven. We are curious to hear how Richie Rich and Amanda Lepore feel about the change of owners, as they are practically the only ones still throwing parties there. In an article published November 1st this month in AMNY titled "Down Days for NYC Nightlife", David Rabin made the following statement:

"There are a lot of reasons why the days of Studio 54 and other great clubs of the '70s are not here anymore, for one thing, crowds have become much more self-separating. When I first started gong out in the late '70s and early '80s, everyone was under the same roof. Straight, gay, black, white, male, female, it was awesome."

Today, money wins out over creativity in every case. I mean this is old, old news. And, in a way, Rabin has himself to partially blame. Lotus was one of the first clubs to offer Bottleservice, which was a huge catalyst in this change from an ecclectic mixed crowd, to models and their banker boyfriends. With the torch being officially handed down to the new kids on the block, this guarantees another season of fresh guidos in meatpacking. Happy spotting.