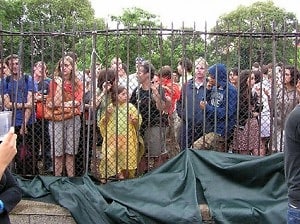 To appease New Yorkers stuck sweating in the city's horrid humidity, a cooling tidal wave of free goings-on go on each summer. But ironically, these seemingly meritocratic events become almost as exclusive and annoying as NYC's pricier options. Because they're free. And because, as Chiara Atik said, "they're why Communism failed."

Here's a free look at the worst offenders: 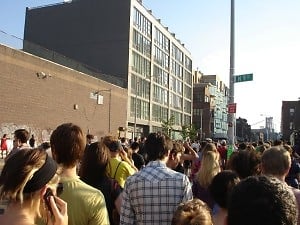 Jelly's perpetually endangered free summer concert series attracts indie bands and hordes of colorful (though mostly white) hipsters who love 'em. Previously held in the weedy ruins of McCarren Park Pool, the series shimmied down to the nearby East River State Park on the Williamsburg waterfront last year after plans were finalized to return the dessicated pool to its former aquatic glory. Shows are all free, which is just great if the band you intend to see is under-the-radar. But when hype machines like MGMT and The Ting Tings (who played together at McCarren in 2008) or Grizzly Bear (last year) drop by, their scrawny, pasty and bearded disciples can wait in twisting lines for two hours or more, in some cases having their patience rewarded by being turned away once they finally reach the door. Jay-Z and Beyoncé mysteriously avoided such hassles at last year's Grizzly blowout.

The granddaddy of gratis outdoor movie screenings, this series screens an eclectic roster of classics--this summer's offerings range from Goldfinger to Carousel to Rosemary's Baby, among others--on the lawn of the midtown oasis. Unfortunately, snagging prime picnic blanket space involves a Herculean, elbow-throwing gauntlet when the Lawn opens at 5pm, a good three or four hours before the screenings begin at sundown. Two words: hip flasks.

The bad news: Drakegate (with an inexplicable dash of Hanson fever) marred this concert program at Pier 17. The good news: Drakegate's messy aftermath saved New Yorkers from a free Ke$ha gig. But the shows must go on, and local music lovers of less questionable taste than the Ke$ha faithful can get their fill of bands like Apples in Stereo, Free Energy, and Yacht through August 13th. 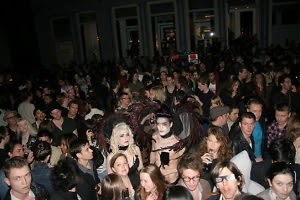 Gallery openings are among the chiller, more dependable and most consistent (they're year-round, of course) free cultural offerings in the city. Just a sedate crowd, sipping on free adult beverages, pretending to know what they're talking about as they regurgitate lessons from that Art History survey course they took freshman spring. But once in awhile, the stars align to create a gallery opening that more closely resembles a G20 protest. And when it does, blame Ryan McGinley. When the baby-faced hipster demigod opened his latest photography showing at SoHo's Team Gallery in March, art school types deluged Grand Street jonesing for a chance to see the beautifully photographed, black & white hipster genitalia inside. In the ultimate sign of a successful spontaneous clusterfuck, the FDNY eventually shut things down.

Shakespeare in the Park

Big time movie stars earn some thee-ate-er cred every year when they dust off their best Bard material at the Public's Shakespeare in the Park at the Delacorte Theater. Al Pacino is currently starring in "The Merchant of Venice." But while the celebs--others have included Anne Hathaway and Meryl Streep--briefly escape the multiplex, they bring Eclipse-like blockbuster lines with them. Theater geeks have been known to start camping out at 2am the morning of the shows for stargazing of the celestial and Hollywood variety, with the afterthought of some good Shakespeare. 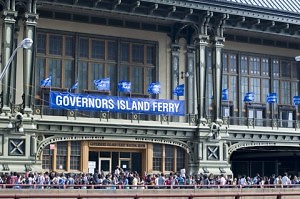 Fledgling cultural hotspot Governors Island put together an enviable lineup for its free concert series. Passion Pit played last night, with shows from She & Him, Caribou, Local Natives, Grizzly Bear and more to follow. But getting there involves some seriously German efficiency as plains, trains and automobiles are replaced with ferries, wristbands and bumming around Governors Island for two hours between the last ferry departure at 5:30 and the start of the shows. And that's assuming you get on the ferry at all.

The fact that all of these happenings are worth the effort involved in experiencing them is something of a relief. But thanks maybe to the summer heat, I can't help but wish they didn't demand such effort. Only in New York could free stuff somehow feel like a ripoff. I say charge a very nominal amount, 5 bucks maybe, and see these concerts, screenings and shows thrive as their lines dwindle.