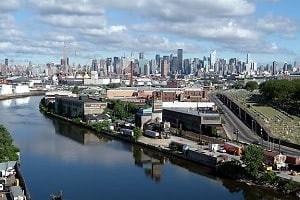 So Newtown Creek isn't a neighborhood. It can't even claim to belong to one borough, as it forms a border between Brooklyn and Queens. But if recent history is any indication, the area abutting the creek is the next, or current, coolest 'hood in the city. Why? Because it's New York's latest toxic Superfund site.

The 3.5 mile estuary lies between the established rock & roll & pierogi cool of Greenpoint and Long Island City, the gritty post-industrial neighborhood that has been poised to be the next big thing for roughly a decade. Indie demigod Sufjan Stevens wrote a song about Casimir Pulaski Day; Pulaski bridge, which is named after the Polish immigrant turned American Revolutionary War hero, straddles the creek. (The tune is off Stevens' Illinois album, which reminds me that the singer is really procrastinating on his project to write and record an album for each of the 50 states in the union.) And reigning buzz band Titus Andronicus played a show at Newtown Barge Park during June's Northside Festival. 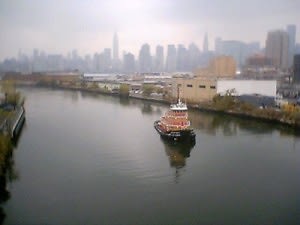 All impressive, but the case of the Gowanus Canal proves that a Superfund designation can at once threaten and confirm an area's coolness. When the Gowanus earned its title last March, rapacious developers put several big, glossy projects on hold. Artsy "pioneers" celebrated the stalled makeover. But a few months later, the tribal rituals of the neighborhood's creative class came under assault when overexposure (or killjoy landlords) shut down BKLYN Yard, home of the summer Sunday Best dance party among other good times, a week after it opened for the season.

Of course, plenty of other Gowanus gems held on, including The Bell House, Littlefield and the Old American Can Factory. But Newtown Creek shouldn't get too rowdy if it wants the party to continue. (And, on a serious note, should really celebrate the potential cleanup of decades' worth of oil contamination.) Ecosystems of cool are quite fragile, and any attention called to them endangers their health.