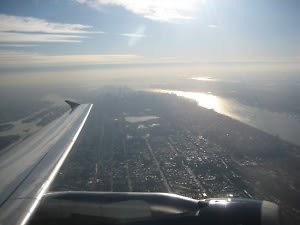 New York is often called the Capital of the World. But for all its gravitational pull, NYC loses some of its brightest lights to ostensibly lesser cities (even Boston). Let's look at notable members of the New Yorker diaspora, and where they landed.

The latest New York refugee is celebrated Brooklyn novelist Jonathan Lethem, who sent shockwaves through the borough's flea and farmer's markets by announcing a move to, of all places, Malibu. But the Motherless Brooklyn and Fortress of Solitude author (and one of "the Jonathans") is hardly the first to flee the city that made him.

Here are the favored escape routes of esteemed New Yorkers:

Odds of Dying: Even

Odds of Returning to New York: 3:2 (better odds if you return for your own funeral)

Who Moves There from New York: Art house film directors (Woody Allen to London, Wes Anderson to Paris); Rhodes and Fulbright scholars; artists (all of them, to Paris in the 1920s and Berlin now); writers; DJs (to Berlin)

Odds of Returning to New York: 1:3

Odds of Returning to New York: Depends on ferocity of anti-incumbent sentiment

Odds of Succeeding: Even (Harvard is much harder to get into than fail out of)

Odds of Returning to New York: 3:1