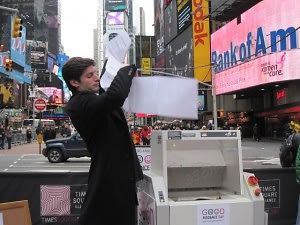 Remember the time you woke up next to a bum on the corner of west 14th sans one shoe?  Well, say goodbye to horrifying hangover memories such as this and head on over to the Nexus of the World on December 28 for the 5th Annual Good Riddance Day.

In Times Square, on Broadway Plaza between 43rd and 44th Streets at 12pm-1pm next Wednesday, you'll have a chance to bid farewell to your worst memories of the year and have a fresh start in 2012.

A giant shredder, along with a dumpster and a sledgehammer, will be on hand to help you get rid of your most depressing, embarrassing, shameful mems of the year.

Plus, the most creative (or perhaps most pathetic) entry wins an iPad 2!

So say goodbye to your bad grades, bad influences, poor health, money woes, fake friends, sh*tty bosses (or flip-side: unemployment), and lousy lovers of the year. If you don't have anything you can physically shred, stationery will be available on site for you to list your grievances.

So go ahead, exorcise and shred your proverbial demons. Personally, our weapon of choice would be the sledgehammer. 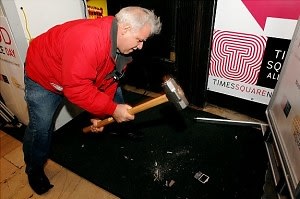 "Good Riddance Day is inspired by a Latin American tradition in which New Year’s revelers put artifacts from the previous year into giant dolls and set them on fire."

Here's to a Happy Good Riddance Day, and a less embarrassing 2012.