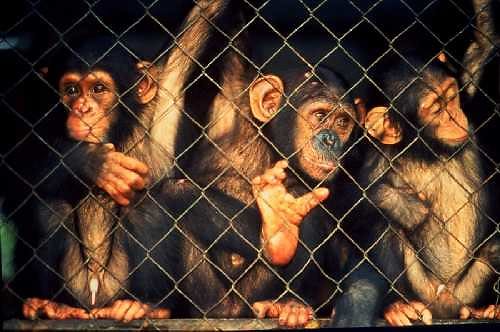 That's right, bushmeat, you know like green monkey, warthog, pieces of baboon, i.e. African wild game. You can now forget about working off that Turkey hangover (and all that tryptophane). Just ask Mamie Manneh of Staten Island who was recently in court for illegally bringing in these delectable treats from Africa. Apparently its a pretty active trade, and those from Africa who grew up on these meats don't really see the problem of bringing them in.

Just ask Edward Lama Wonkeryor who lectures at Temple University. He likes to eat moneky, bush hog, and lion. He not only finds them to be comfort foods, but says they make him feel smarter.

"his mother would wrap parcels of bushmeat...and slip them into his suitcase. He would save them for events like weddings and christenings, or when he wanted to feel smarter. If I were going to take the Graduate Record Examination or the Law School Admissions Test, definitely I would” eat bushmeat beforehand...I am really surprised that they are making a big issue out of this.”

Wait a second? They make him feel smarter? He doesn't see why its a big issue? wtf!? Hmmm...maybe you've never heard of Ebola or H.I.V.?

Epidemiologists have shown that ebola can be contracted by butchering chimpanzees, and the first human case of H.I.V. probably originated through similar exposure, said Nathan Wolfe, a professor of epidemiology at the University of California in Los Angeles.

There you have it, bushmeat, a sound and healthy alternative to Turkey.