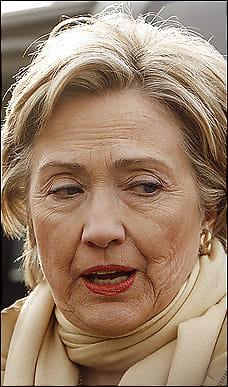 Ever had a camera follow you around all day and take thousands of pictures? Probably not. But if you did, there would most certainly be hundreds of unflattering pictures taken of you looking wide-eyed, lost, concerned, etc. Just take the picture of Hillary Clinton above where she has a hangdog face.

In the new age of digital cameras, and heavily photographed/covered candidates, expect these images to be used like never before.

Given how many ups and downs there have been in the race so far, most candidates have been subject, at one point or another, to seeing themselves look like losers. The popular Drudge Report Web site recently ran a particularly notorious picture of Hillary Clinton, showing her face riven with deep furrows and wrinkles. She looked so awful that even some conservative commentators noted the unfairness of using such a manifestly unflattering image. [Washington Post]

So be prepared to see some pretty silly images, and take them with grain of salt...i.e. don't vote based on them!