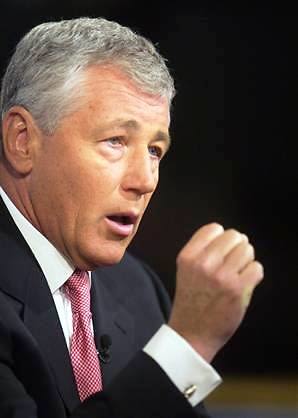 In life, we have always lived according to the old saying "the more the merrier", especially when throwing a party.  We think that our country should do the same regarding its political parties. Today on the Van Der Galien Gazette political blog, we once again heard that this may not be so far off.  Seems a certain mayor from the epicenter of the world may look to team up with a certain senator from the middle of the country nowhere.  On May 2, 2007, Senator Chuck Hagel from Nebraska had a dinner with Mayor Mike Bloomberg of NY.  During a May 13, 2007 appearance on Meet the Press, Hagel entertained the possibility of an independent run with Bloomberg. "It's a great country to think about -- a New York boy and a Nebraska boy to be teamed up leading this nation." We think it is just crazy enough to work.

Hagel is notorious for his criticism of the Bush administration (he is himself Republican), and is arguably the most prominent member of his party to do so, making several much publicized comments:

"There will be no victory or defeat for the United States in Iraq," In the Washington Post after Republican losses in the '06 midterm election.

"(It would be) the most dangerous foreign policy blunder in this country since Vietnam, if it's carried out." Regarding Bush's plan to send an additional 20,000 troops into Iraq. (Jan '07)

It may seem highly unlikely that an independent team would take over office at this point, however '09 is looking to break the norm and this may be a positive step forward.   With Hagel's experience and Bloomberg's money, they could surprise us all with quite a party.