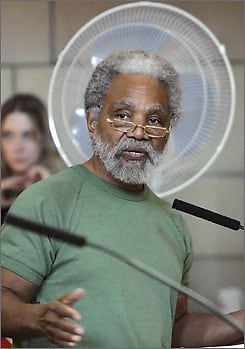 [photo from USA Today]
Senator Ernie Chambers of Nebraska has filed a lawsuit against God...and it's not because he loves the herb either (see below post). The action seeks a "permanent injunction ordering Defendant to cease certain harmful activities and the making of terroristic threats."

According to the lawsuit the "Defendant directly and proximately has caused, inter alia (among other things), fearsome floods, egregious earthquakes, horrendous hurricanes, terrifying tornados, pestilential plagues, ferocious famines, devastating droughts, genocidal wars, birth defects and the like." Hey, if this guy has the time to go around suing just anybody, we can think of a couple people we'd like to add to his list.

Senator Chambers claims he just wants to make the point that the constitution allows a lawsuit to be filed for any reason., "This is a way to show that anyone can sue anyone including God. It's an object lesson too. It demonstrates that the mere filing of a lawsuit doesn't guarantee a win."