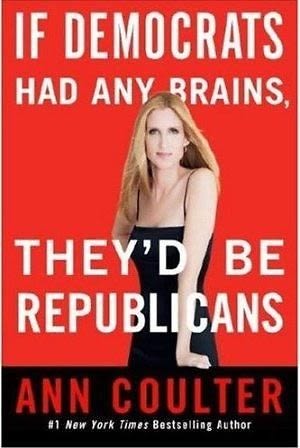 Today Ann Coulter's new book hits shelves, which to us only means one thing, we are going to have to hear about her and see her promoting it around media outlets for the next 3 months. So far, the most official evidence of this woman's craziness came forth in the interview that the "Rush Limbaugh in a miniskirt" gave to George Gurley of the New York Observer. In it Ann says:

"If we took away women's right to vote, we'd never have to worry about another Democrat president. It's kind of a pipe dream, it's a personal fantasy of mine, but I don't think it's going to happen. And it is a good way of making the point that women are voting so stupidly, at least single women."

Yes Coulter has dreamt of women not having free speech for awhile now....then she woke up and realized it would be a NIGHTMARE, because she would be out of a career.

Seriously, what an idiot. While we tend to keep our political opinions to ourselves, this interview is just a blatant slap of in-your-face retardation. Come on Ann, you are a Cornell grad.

p.s. Ann Coulter herself has been single her entire life.